The brain was previously seen as a machine that was unable to repair itself, with a definite number of neuronal cells that once lost had no possibility of cell recovery. Acquired brain injuries, neurodegenerative diseases, and neurodevelopmental disorders were seen as a dead end for many. Individuals with severe brain damage were given little hope of recovery.

The discovery of neuroplasticity—the process in which changes in neural pathways take place due to changes in behavior, neural processes, environment, and emotions—was a breakthrough in neuroscience research and rehabilitation medicine.

Dr. Norman Doidge, author of the New York Times Bestseller, The Brain That Changes Itself, provides an eloquent and fascinating synopsis of the current scientific understanding of the process of neuroplasticity. With lucid language, Dr. Doidge explains this complex concept with the goal of educating and enlightening patients, family, and clinicians of the many possibilities of recovery. The stages include neurostimulation, neuromodulation, neurorelaxation, and neurodifferention and learning. Each chapter is devoted to one of the stages while providing narratives of individuals who used this neuroplastic approach for recovery.

The narratives of these individuals are truly captivating and emotionally powerful. Each case is different from the next, reminding readers that no one injury is the same and no two brains are alike. This highlights the importance of treating an individual based on needs, strengths, and weakness and not on the disease or problem alone. As Dr. Doidge states, “We don’t treat diseases, we treat people.” Some of the techniques used by the patients described in the book include light therapy to rewire the brain, healing severe movement deficits through mental awareness of movement, and exercise to alleviate the motor deficits caused by Parkinson’s disease.

John Pepper’s story is one that might be called a miracle. John was diagnosed with Parkinson’s disease, a neurodegenerative disease characterized by damage to brain areas involved in the coordination of movements. The symptoms are manifested as extreme tremors impeding all types of functional movements. In 2008, Dr. Doidge received an email from John describing how he was able to mitigate his Parkinsonism symptoms by exercising. Dr. Doidge describes John’s case in great detail and translates his story into techniques that can be used to heal other types of problems. He also provides scientific and medical evidence-based research to validate John’s case. All of the stories including John’s are engaging and educational and contain a great deal of inspiration and resources for individuals dealing with neurological conditions, as well as their family and healthcare providers. 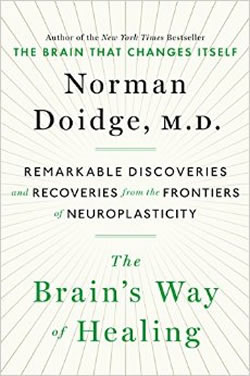