“Scientists began with the assumption that they were learning about the physical processes at work ‘out there’ in stars, hurricanes, dinosaurs, and so forth. Then one day, it began to dawn on us that we were actually studying the processes that gave birth to ourselves.”  Brian Swimme

I’ve recently wondered about the similarities between human healing and other natural events. My research has only begun, and yet I’ve found some very interesting bodies of work to support my curiosity. One is by mathematical cosmologist, Dr. Brian Swimme, known for his work, The Powers of The Universe. In it, he outlines eleven agreed upon qualities that scientists say the Universe partakes in while it evolves. Upon reading them for the first time, I noticed each was familiar; and in some way mirrored common themes in human healing. The list —Seamlessness, Centration, Allurement, Emergence, Homeostasis, Cataclysm, Synergy, Transmutation, Transformation, Interrelatedness, and Radiance— all are words we might apply to the rhythms of our physiological and emotional lives.

For the purpose of this article, I will focus on Transmutation and Transformation. Per Swimme, transmutation is when, “the Universe insists that something new comes forth”. Swimme’s example is that the Universe never seems completely satisfied, that it has to always create something new, something more complex. He gives the example of hydrogen and helium—weren’t their arrivals enough? No, he goes on, the earth emerged and so did bacteria, followed by more complex beings. He explains that transmutation becomes necessary because the Universe periodically comes to a crossroad in which change is necessary or [we] risk being erased from the story.

As a scientist, Swimme has somehow managed to buck the trend of scientific materialism, that all matter is without consciousness, in his intimation that the universe is a living organism, unfolding with deep intelligence and apparent wisdom. He has, himself, undergone a transmutation of consciousness in his recognition that the material world and consciousness are inextricably entwined. In this he joins with a growing number of philosophers, medics, healers, parents and teachers who can no longer abide to a worldview in which mind or consciousness is an epiphenomenon of matter. The ethos that unites these communities is animism, the worldview that dominated human consciousness prior to modernism, which sees all matter as being animated by mind or soul.

The medical approaches accompanying scientific materialism aim to address health issues with great consideration for the physical body, but without consideration for the patient’s emotional life, spiritual life, and subtle energies. For this reason, scientific materialism allows us to do things to ourselves, each other, and the planet that are deleterious to these realms. This is no truer than in obstetrics, in which painful and frightening procedures like anesthesia, forceps, vacuum, and cesarean are often administered with little or no consideration of the consequences on the soma and psyche of the mother and child.

In a world where it is only now becoming acceptable to speak among colleagues and professionals in these terms, the pre and perinatal perspective may find its place as an exemplar and guide to recovering from the four hundred year split of spirit, soul, and matter, that gave rise to scientific materialism. Given that we come into the world enjoying our own consciousness, one that scientific materialism doesn’t recognize, prebirth and birth therapy is well positioned to heal not only the schism enacted on us, but the prevailing world view that we are unconscious at conception and through birth and infancy. The transmutative step of healing the ways each of us have had our inner consciousness or soul overlooked can ripple out to the healing of a culture who has endured the same.

To return to Swimme, herein lies the relevance of Transformation: “An interconnected and self-amplifying dynamic: transmuted individuals give rise to new organizing codes that create a community in which it is even more likely that new individuals will go through transmutation.”

Pioneers like Carl Jung and Otto Rank were outstanding in that they were willing to come forward and share that prebirth and birth experiences had lasting effects on health. They were followed by others, like Nandor Fodor, Francis J. Motte, Lietaert Peerbolte, Frank Lake, R.D. Laing, Stanislov Grof, Elizabeth, Fehr, Thomas Verny, Lloyd De Mause, and David Chamberlain, to name a few. Enough people have, in a literal way, transmuted the effect their prebirth and birth experiences have had on their lives, and through that, have guided others to do the same. The therapeutic work they’ve done with their communities and the theoretical frameworks they then courageously share(d) with the world have informed what we can now call a transformation. Because of them and others, we remember that prebirth and birth shapes our world. Our job is to now decide which side of the shift we are on.

I give thanks to Brian Swimme for his sentient slant on the Universe, one that I agree gives birth to us. And after further study, I’ll be interested to learn if it is the Universe that’s teaching us, or if through our own acts, we also teach the Universe. 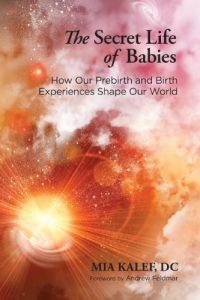 Dr. Mia Kalef is the author of The Secret Life of Babies: How Our Prebirth and Birth Experiences Shape Our World.  She has practiced Craniosacral Therapy for twenty-two years and was a Chiropractor for eighteen of them.  She studies relational intimacy between humans, Nature, and community and teaches in Canada and the U.S. Her home is Vancouver, Canada.   Website: www.miakalef.com