Despite the pace at which science and technology have revolutionized mental health care, a deep sense of discontent with self and interpersonal relationships seems to be on the rise. Observing this paradoxical trend, Sharon G. Mijares, Ph.D., specialist of shamanistic healing, asks, “What is lacking?” (pg. xxi). According to her, the answer is meaning.

“Whereas psychology is a science that addresses mental, emotional, somatic, and relational dynamics, spirituality illuminates the inherent mystery of life itself” (pg. xxii), and, therefore, neither is complete without the other.

This second edition of Modern Psychology and Ancient Wisdom, an anthology of writings from scholars of clinical psychology, psychiatry, and theological studies, showcases Mijares’ skills as an editor in its integration of paradigms that have been traditionally conceived as incompatible — old and new, science and religion, and Eastern and Western philosophies.

With its coverage of eight specific traditions (Buddhism, Christianity, Goddess Spirituality, Judaism, Shamanism, Islam and Sufism, Taoism, and Hinduism), Modern Psychology and Ancient Wisdom offers an impressively broad range of perspective. In its discussion of both the generally familiar (i.e. yogic breathing techniques) and the relatively obscure (i.e. the Hymns to the Goddess Inanna from the third millennium BCE), this far-reaching approach results in a rich commentary that offers some degree of truth to each reader and individualized set of circumstances.

Though it offers a wealth of information, Modern Psychology and Ancient Wisdom unfortunately falls short in delivering more in-depth scientific explanations. While it makes note of recent research in neuropsychology and epigenetics in its introduction, it does not substantiate beyond parenthetical references to a handful of studies conducted within the past two decades. As an editor, Mijares could have strengthened the scientific appeal of her anthology simply by including an additional chapter with selections from neuroscientists and other specialists who could provide more insight into the physiological benefits of psychospiritual therapy.

All things considered, however, Modern Psychology and Ancient Wisdom, in its skillfully respectful reconciliation of seemingly incompatible paradigms, offers a refreshingly alternative approach to modern day psychotherapy. While it may appeal slightly more to the spiritually inclined, this book is an excellent guide for mental healthcare providers and non-professionals alike.

Kimberly Wang is a third-year undergraduate at NYU Gallatin pursuing an individualized degree in neuropsychology and a minor in child and adolescent mental studies. Her academic interests include the natural sciences, philosophy (specifically metaphysics and epistemology), history, language and the visual arts. In her free time, Kim enjoys listening to and playing music, reading, creative writing, drawing, and being outdoors. 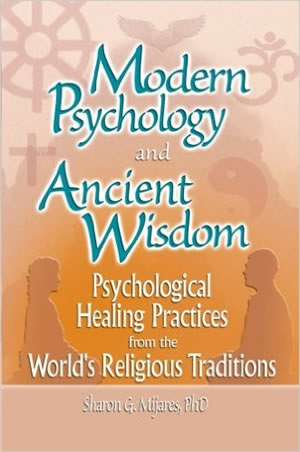