Home Book Reviews The Pursuit of Endurance: Harnessing the Record-Breaking Power of Strength and Resilience

“Our heritage is connected to the land—and movement. The story of humanity is one of constant forward motion. Admit to yourself that you are a mover. You have evolved from a Homo erectus species that has spent thousands of years tracking prey, following herds, searching for reliable food sources and safety, walking to holy sites, and caravanning to markets. Ignite that spark of activity that lies dormant in your being and let it grow. When you start to move, it may hurt and feel uncomfortable, but ultimately you will discover a feeling that suggests you are accomplishing a purpose that your body was designed to achieve” (Pharr Davis, 2018, p. 295).

Have you ever had something land in your lap leaving you with a sense of serendipity? Perhaps synchronicity?

Well, I just finished reading Jennifer Pharr Davis’ book, The Pursuit of Endurance: Harnessing the Record-Breaking Power of Strength and Resilience for that very reason.

Pharr Davis is a record holder of the FKT (fastest known time) on the Appalachian Trail (AT) (2,184 miles), parts of which I’ve hiked extensively in Maine and New Hampshire. I was fascinated to learn about her experience and how she developed the ability to go the distance, faster than anyone before her (and yes, her record has now been surpassed).

I’d heard about her book but hadn’t gotten around to buying it. Then it simply appeared. Well, perhaps not simply. Sitting in a coveted aisle seat on a small plane heading home, I felt exhausted and ill. I was not in a good mood. My seat mate arrived, indicated she had the aisle seat, wanted me to move. I was rather egotistical about my being in the right seat and refused. She kindly took the window seat.

After a cat nap, I realized my error and noted my ego’s ferocity. I apologized and offered to change seats. She declined citing nap time, too. She had a book on her lap. I commented that friends had highly recommended it. She said was almost done and loving it. I closed my eyes and was soon asleep.

I awoke as we were landing in Sacramento. She’d finished the book. And she, in the name of good will and good books, gave me the book. Once I was done, I was to pass it on. I was stunned. Here I was rude and rather petulant, and yes, I apologized and made amends but still I wasn’t the nicest person in our initial moment of meeting. And here she was, kind, generous, loving. I’m not typically rude. In fact, I try to live with love and compassion. And, I am human, and I have my moments. I felt her acceptance and in turn stopped judging myself so harshly.

So, About the Book

It’s a memoir. First person, real life narratives resonate with me. They touch me in a different way than fiction. I appreciated her stories on the trail and her tales of colleagues also breaking records. Reading immersed me in long distance trail travel—the culture as well as intimate insights as to who does this, why and how. The entire experience fascinates me. 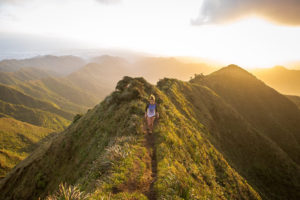 I spent time on the AT while living in New Hampshire (NH). I logged many miles on its trails in Maine and NH; the trails in NH’s White Mountains kept me trekking throughout my 26-year New England residence. Now living in California, I dedicate several weeks every summer doing ‘trail magic’ for thru hikers—their title if going from start to finish as opposed to section hikers, those doing parts at a time—on the Pacific Crest Trail (PCT) (2,654 miles). A friend and I hike south on their northern route in the Sierra Nevada Mountain Range. We pack in edible treats. She, Starburst candies. Me, juicy, fresh ripe fruit, a rarity on the trail. I love talking with thru hikers. I want to know why they started, what keeps them going, what is challenging, freeing. My what’s and whys and how comes seem endless. Most share their stories. Some are in more of a hurry than others: deadlines for food drops, schedules to either break a record or make it to the end before snow flies. I also ask about food and managing their technical gear and about their mental and emotional states.

I’m a long-distance hiker in my own way—25 miles in one day is a good day for me. And then I go home and shower and have dinner, a glass of wine. The extend of my backpacking is an 8-day trip, including several significant mountain passes, a few peaks, and around 110 miles. Nothing compared to what these hikers are attempting and accomplishing. 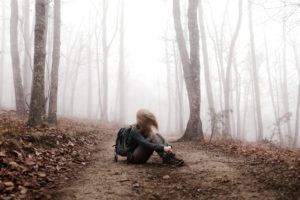 So, I’m curious about where their inner reserves come from and how they draw on them in the heat of misery, pain, suffering. Where does the resiliency come from? Is it from God? Instilled in our being at birth?

Pharr Davis delves into these questions with intriguing responses; her own and others she’s met on the journey. She starts with a historical look at humans and distance travel, moving from survival-based need to recreation, from fleet-footed messengers to spiritual pilgrimages. She brings in stories, information and personal reflection. She discusses finances, comradery and support. Amazing and true, when someone is attempting an FKT, the current record holder often comes to help. There’s injuries and decisions to be made. There’s the moment when it’s almost done and the hiker is basically emotionally and physically spent, and yet, the goal is reached, the summit obtained. Pharr Davis’ interviews with those who tried and failed, who tried and succeeded, bring insight into their resiliency and their darn determination to make it happen.

I felt a twinge of sadness that Pharr Davis doesn’t hike as much, hasn’t planned any more long-distance treks. She’s a mother of two, a wife, has another life. But, she remains part of the hiker community, as much so as any hiker, including those who have earned FKTs on multiple trails and earned the distinction of the Triple Crown of Hiking—they’ve completed the Pacific Crest Trail (2,654 miles), the Appalachian Trail (2,184 miles) and the Continental Divide (3,100 miles) with a combined total of 7,900 miles and this is the most amazing, over 1,000, 000 feet of elevation gain. Believe me, hiking flat is one thing, going over 14,000-plus-feet high mountain passes over and over, up and down all day long, it’s harder than nonhikers think.

The book’s presentation is a mix that worked for me. Even though it took me several months to read the book what with work and family and hiking, every time I picked it up, I felt up to speed. I didn’t have to reread past pages to know where I was. She masterfully kept the flow going.
The book is ready for another reader. Who’s next?

“Jennifer Pharr Davis is an American long-distance hiker, an author, a speaker, a National Geographic Adventurer of the Year, and an ambassador for the American Hiking Society. She has hiked more than 14,000 miles on six continents. In 2011, she set the unofficial record for the fastest thru hike of the Appalachian Trail with a time of 46 days, 11 hours, and 20 minutes, an average of 47 miles a day, a record she held for four years. Pharr Davis lives in Asheville, North Caroline, with her husband Brew, and their daughter and son, Charley and Gus” (from the back of the book jacket).

Photo by Kalen Emsley on Unsplash: runner on ridge

Photo by Andrew Neel on Unsplash: woman in mist