“Psychotherapy is rooted in an ethos and devotion to the common good. It asks us to examine the processes of self-deception that perpetuate individual unhappiness and social structures that are inequitable and oppressive. Yet psychotherapy has for the most part been a white, privileged profession, hence training and treatment has focused on this population” (Ellis, 2016:11).

I had a dream. I wanted to create a shop-fronted organisation on my local High Street to offer drop-in counselling and psychotherapy services. It was quite easy to imagine given that Gloucester Road, my local High Street in North Bristol, is well-known in the UK for being a High Street boasting a high percentage of independently owned and run shops (which is sadly now relatively unusual in the UK). It wouldn’t be a bad location either; not the poorest nor the poshest area of town, with a strong community focus. Accessible, popular, not intimidating as some Bristol suburbs can be with their visible wealth. 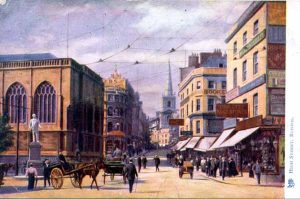 To tell the truth, the dream extended beyond my local High Street. I envisioned drop-in centres in all towns and cities in the UK, maybe even beyond! A place for people to seek support in a ‘normalised’ setting. Now this wasn’t simply a therapy centre for private practitioners to hire rooms. No, I imagined a beautiful space, a welcoming place for people of all backgrounds. A gathering and meeting place for anyone and everyone to network and gather information.

I envisioned a building located in the heart of the community. The centre’s staff and occupants could maintain contact with specialised local counselling services, training institutions, and with local doctor’s surgeries and hospitals. Group meeting rooms, individual therapy rooms, and a comprehensive library and resource centre were designed with people in mind. Space existed where they might make themselves a drink whilst browsing and meeting others.

In this centre, diversity was reflected in the type counselling and psychotherapy offered from different modalities and traditions, including body psychotherapy. Folks could finally stop asking ‘what’s that?’ as the power of somatic work became more widely understood and accepted. Short-term work was to exist alongside long term work, rather than the current preoccupation and prioritising of cognitive behavioural therapy and short-termism in the UK government’s preferred approaches. Seeking therapy had the potential to become commonplace, as acceptable and as affordable as going to the post office or buying bread or carrots.

Of course, quite a significant shift needs to occur for this dream to manifest. Therapy still isn’t, in the UK at least, as ordinary, as acceptable and as affordable as buying bread or carrots. In its public provision, it’s caught up with economics and the prevailing agendas of the medical profession and the increasingly market-driven professionalization of the mainstream therapy membership bodies.

There are still taboos around seeking therapy in the UK; maybe the taboos are less of an issue in the USA? Many people can’t afford therapy nor even know where to begin in finding a therapist. Many don’t realise that therapy might be useful and relevant to them. There are, thank goodness, therapy services offering low-cost and subsidised therapy, many in Bristol; but, these services tend to have increasingly long waiting lists and, by necessity, have tended to move to a model of short-term, solution-focused methods. Nothing wrong with those necessarily, except for when a client wants longer term therapy and given the limitations that exist when this sort of long term therapy is under increasing threat, serving those most in need at the edges of society, run by often over-worked, dedicated staff trying to make ends meet and be present for their clients.

I dreamt that our care for one another’s psychological and spiritual well being was such a priority there was a solid presence in every town and city. If we can have bookmakers, coffee shops and insurance brokers, surely we can have therapy on the High Street? This care and the existence of these centres potentially meant true ‘care in the community’ in the words of the system of deinstitutionalization that happened under Margaret Thatcher’s term in 1983, treating and caring for differently-abled people in their homes rather than in an institution (what actually happened in many cases is that the care failed to happen.)

Therapists not only had the chance to practice in the city centre, but also to meet, join together and advocate for change. After all: “Therapists are always expressing a political position – because their work always and inevitably flows from a view on how humans should be, and therefore carries a vision of how we could become and how we should be. However, these visions and positions are often implicit rather than explicit or even held out of consciousness” (Totton, 2012: 92).

So what happened to my dream?