A big wooden gate leads to a large garden with tiled patios. Potted pansies, geraniums and hedge lined walkways welcome new patients as they enter the private inpatient detox and rehab center where I’ve worked the last four years. Whenever new patients walk into this serene atmosphere, usually accompanied by close family members, I feel as though I already know their stories. I know that they come from chaos but may choose not to talk about it. I know that they lost control over their lives and suffered a great deal of pain but also inflicted pain on their loved ones and probably on strangers, too. 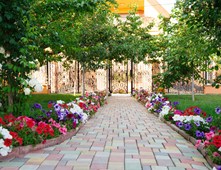 My professional experience had taught me that they were also severely traumatized and probably suffer from the ramifications of both developmental traumas (troubled relationships usually with primary caregivers) and shock traumas (events such as car accidents and assaults). Nevertheless, although trauma seems to be an inevitable part of the addict’s life story, my experience has taught me that I probably won’t be able to obtain a full trauma history from my addicted clients in the way it is usually possible with non-addicted ones. Although both kinds of clients may have difficulties identifying or describing their developmental issues, due to extended periods of intoxication addicts are only able to recall some of the shock traumas they endured. In fact, many addicts have no recollection of events they were involved in during time of active addiction. While part of this memory loss can be attributed to dissociation (a defense mechanism in which a person is detached from emotions, memories or sensations) as result of painful traumatic events, memory loss for short or extended periods of time (not necessarily trauma related) can also be attributed to excessive use of alcohol or drugs. If we consider the fact that substance abuse leads to impaired judgment and a higher chance for risky behavior such as driving under the influence and unplanned sexual encounters, it is quit probable that addicts expose themselves to further trauma although they might not be able to recall what had happened. In fact, clients consistently share stories of waking up in surreal circumstances.

Many of my clients, both men and women described wakening in bed with people they’re not familiar with, or lying on a bench somewhere, sometimes with unfamiliar bruises on their body. One of my clients realized he had spent the night at a cemetery as he was waking up after a long night of drinking beer. Another client woke up in a hospital after undergoing a hip surgery. Nurses told him he’d been found lying on the street, near the sidewalk; he assumed he had a car accident. Sadly, an addict’s typical way of dealing with these circumstances involves the consumption of more alcohol, a few more prescription pills or other kinds of drugs. These types of events are typical and reoccur again and again in the course of the chaotic active addiction, which often goes on for years and years. Unfortunately, as I will discuss later in this article, having no memory of an event does not mean it has no impact on one’s life. These ‘forgotten’ events might still affect people’s perceptions, emotions and behaviors without them ever being able to make a connection between present and past or process them verbally at a therapeutic session.

In his book, Trauma and Memory: Brain and Body in a Search for the Living Past, Peter Levine (2015) describes the so-called good guy/bad guy experiment conducted by Antonio Damasio (considered one of the world’s leading neurologists). In short, this experiment involved a man who has lived in a group home for the mentally disabled since he suffered severe brain damage to his limbic system (his temporal lobes including the amygdala and hippocampus, which affect emotions and short term memory). His intellect was above average and he appeared to be completely normal as long as the task-at-hand did not involve any emotional or social association. In fact, he was unable to remember or learn any new facts and as a result as soon as an interaction with another person was over, it no longer existed for him. He was neither able to identify the person with whom he was interacting or recall any content of the interaction. In this experiment, the staff at the group home was asked to consistently behave
either in a friendly manner (to smile, be helpful) or in an unfriendly one (say confusing things) for five consecutive days. This experiment showed that although this person had no recollection of these interactions, 80{f4ab6da3d8e6a1663eb812c4a6ddbdbf8dd0d0aad2c33f2e7a181fd91007046e} of the time he chose to approach the friendly people and avoided the unfriendly ones. His behavior was influenced by previous encounters although the decision to approach or avoid had no conscious awareness.

Another interesting case that was documented by Krikorian & Layton (1998) involved a construction accident in which a 53-year-old construction worker was completely buried for 15 minutes under 5.5 meters of sand. The man was conscious at first but lost consciousness after a few minutes due to anoxia (low oxygen). He was hospitalized and stayed in a state of coma for two days. Three weeks later he was released from the hospital after making a relatively good physical recovery. A few months after the accident his doctors assumed he was able to resume his occupational and social activities. All this time, however, due to the anoxia, he had no conscious recollection of the accident. Nonetheless, in spite of his fairly good physical recovery the man became depressed and anxious and constantly preoccupied with the possibility of sudden death with specific fears about the earth opening up and swallowing him. He avoided walking and driving outside his home and stayed away from construction sites. He met all the criteria for PTSD and his symptoms persisted for years despite psychiatric and psychotherapy treatments. Since he had no conscious recollection of the event, he assumed his problems were related to a physiological problem not yet discovered.

Implicit memory includes both emotional memory and procedural memory (fixed action patterns), which constantly interact. Fixed survival-based emergency responses (such as fighting or fleeing) and approach and avoidance response tendencies (as seen in the experiment of the man in the group home) are all part of procedural memory. Emotional memory, on the other hand, is triggered when a situation provokes emotions in the same intensity as the emotions triggered by a different situation that was previously encoded as an important experience. These emotions, as charged signals, then provoke procedural memories (fixed action patterns). It is important to note that emotional memories are experienced not only on a mental level but also on the body level, as physical sensations (Levine, 2015).

How does reactivation of implicit memory affect and even shape our lives? The basic elements of implicit memory are mental models that are activated automatically each moment by the brain and help us quickly evaluate a situation and conclude what will happen at the next moment (Siegel, 2012).

Mental models are involved in our development. As early as the first days of life the infant’s brain originates such models through comparative processes in which the brain identifies similarities and differences across repeated experiences in the environment. In fact, the activation of old mental models, based on our relationships with important figures such as our caregivers, actively filters our interactions with others. This ‘transference’ happens many times outside the scope of our awareness, but nevertheless, results in automatic and/or repetitive behavior (Siegel, 2012).

Mental models are also activated when we need to protect ourselves. A generalized mental model of “large toothed animals are dangerous” that is based on prior experiences will lead to an association of fear while recalling such an animal. Fear will then motivate us to run for safety at the sight of an even slightly different “large toothed animal” without the need to re-evaluate whether the situation is dangerous or not (Siegel, 2012). In this example, the emotional memory of fear (also experienced on the physical level as rapid breathing, tense muscles, etc.,) provokes the survival based fleeing response that is part of our procedural memory.