One of the most important and influential figures in somatic psychology is… a philosopher. Odd? Actually not. Because the more we learn about Eugene Gendlin’s revolutionary philosophy of the body, the more it makes sense that he is known as one of the originators of modern body-oriented psychotherapy. 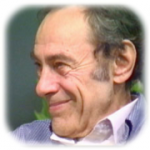 Gendlin’s influence is well-documented. In October 2010, when Peter Levine received the Lifetime Achievement Award from the U.S. Association for Body Psychotherapy, he recommended Gene Gendlin from the stage to be the next recipient of the award, citing Gendlin’s seminal contributions to his work, Somatic Experiencing. Gendlin’s Focusing was incorporated by Ron Kurtz into his Hakomi Method (1997), and both SE and Hakomi led to Sensorimotor Therapy (Ogden et al., 2006). Bessel van der Kolk (in his foreward to Ogden et al., 2006) lists Gendlin’s Focusing as one of the primary ways to help traumatized individuals feel safe with feelings and sensations. In fact, anyone working somatically today owes a debt to Gendlin’s paradigm-shifting discovery of the bodily “felt sense” as a source of meaning and change.

Eugene Gendlin was born into a Jewish family in Austria in 1926. At age 11, young Gene watched his father make intuitive choices, trusting one person and not trusting another, that enabled them to escape the Nazis, when many other families were blocked from leaving the country and later were sent to their deaths. When Gene asked, “Papa, how did you know you could not trust that person?” his father tapped his chest and said, “I follow my feeling” (Korbei, 2007.)

When emotional reactions can famously lead us astray, what kind of feeling is it that can be trusted to guide us through life-and-death decisions? That would be what Gendlin calls a “felt sense,” a freshly forming, wholistic sense of a situation that has a “more than words can say” quality to it. Throughout human history people have had felt senses, but until Gendlin came along no one had named them or explained them. What was the unique life journey that led him to see what was under all of our noses?

The Road to Focusing

Young Gene arrived in the US with his family in 1938, and they settled in Washington DC. He served in the Navy in the Pacific theater at the end of World War II, and on the long night watches he began thinking about the nature of time. On a bus ride, he picked up a volume on the history of philosophy, and discovered that other people had been thinking about the same kind of thing. When he went back to school, philosophy was the ticket.

In 1952, as a philosophy graduate student at the University of Chicago, young Gene joined Carl Rogers’ psychotherapy training program and began a collaboration with Rogers that ultimately transformed both of them. Gene’s input changed the type of research being done by the Rogers group and ultimately caused Rogers to reformulate his theory of the human change process. In On Becoming a Person (1961) Rogers gave credit to Eugene Gendlin “whose demonstrated ability to think in new ways about [psychotherapy] has been particularly helpful, and from whom I have borrowed heavily.” Gene (in a personal communication) summed up their connection this way: “Without Carl Rogers I would not have been possible.”

What Gendlin brought to Rogers in the psychology department was a question he had been wrestling with in the philosophy department: how an experience that comes before words becomes an idea framed in words. We know more than we can say . . . and the place where we know it seems to be, remarkably, the body.

Gendlin and Rogers collaborated (along with others) on important early research on psychotherapy outcomes. The research showed that clients who “freshly referred to ongoing felt experiencing” during the therapy sessions tended to have significantly more positive therapy outcomes than clients who merely talked about their problems or their emotions. The raters, listening to the tapes, could tell from how the clients spoke – “Uh . . . I’m not sure how to say this . . .  It’s right here . . . It’s not exactly anger . . . ” – that they were in touch with something immediate, real, and hard to describe. Furthermore, these clients often gestured towards their bodies when saying things like “it’s right here.” The key to successful psychotherapy outcomes was in the body.

To read Ann’s entire tribute, click here: Eugene Gendlin. Or subscribe while it’s still free and get your Winter 2016 PDF link delivered directly to your inbox!