In Want, Lynn Steger Strong writes for the times we’re living in. Saddled with plenty of responsibilities, and jobs that simply don’t pay enough, Elizabeth is very much a 21st century woman. Her dissatisfaction with her life, and her desire for everything she does not have is what feeds the novel’s core conflicts. Steger Strong asks us: Why must a woman with so much still want more?

The book begins with a memory of Elizabeth and her best friend from childhood, Sasha. Elizabeth, now an adult, has lost contact with Sasha and often reminisces about their intense friendship and the possibilities of reconnecting with her. Elizabeth is sadly discontent with her life and though her relationships with those closest to her flounder, she is most fixated on her and her husband’s lack of financial stability–a gripe that feeds into the age old conundrum of do what you love or do what you need to feed your family.

As both the title and the central themes of the book suggest, Elizabeth is a woman who seeks more than what she has. Steger Strong implores us to think about motherhood more deeply, and question why mothers aren’t encouraged to express their frustration in juggling motherhood, their personal lives, and their careers.

Elizabeth complains about financial woes while having wealthy parents and hobnobbing in affluent circles. She seems to have a real passion for her job as a charter school teacher, but doesn’t believe she can actually help her students. This, juxtaposed with her position as an adjunct professor at her ritzy alma alter, illustrates the worlds that Elizabeth straddles as an English PhD graduate. She often skips classes to go on walks alone to bookstores and coffee shops, leaving her coworkers to pick up her slack. One could argue that Elizabeth is a deeply privileged narrator whose grievances with life seem quite trivial. Though this is a fair assessment, Elizabeth’s character is an affront to the idea of keeping up appearances, and lifts the veil on a lot of middle-class strife and fear.

Steger Strong’s Want is not as much a commentary on Elizabeth’s life as it is on 21st century American capitalism. Elizabeth is a narrator for a generation that is both overworked, and over-educated, yet underpaid. Constantly feeling as though they have disappointed and under-performed, these feelings of isolation and loneliness all eat away at Elizabeth’s self worth and disposition. Even prior to the Covid-19 pandemic, the recession of 2008 left an indelible mark on the minds of young people. Many realized that a dream career often comes with huge financial sacrifice.

Lynn Steger Strong was born and raised in South Florida and received an MFA in Fiction from Columbia University where she also taught Freshman Writing. She lives in Brooklyn with her husband and two small girls. 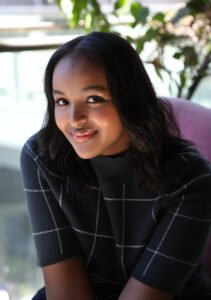 Yasmin Farah is a student pursuing an undergraduate individualized degree in psychology/psychoanalytic humanities at the Gallatin School at New York University. Her interests include trauma, migration, and cultural psychology.