Blossoming is Mandatory, Sparkling is Optional.

Contemplating from the Pre and Perinatal Perspective.

It’s Never Too Late: Healing Prebirth and Birth At Any Age – Review

It’s Never Too Late: Healing Prebirth and Birth at Any Age – A Reflection...

Letter from the Editor 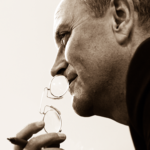 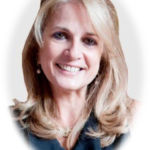 With
Genovino Ferri and Mary Jane A. Paiva

When we talk about the primary object relationship, we first need to clarify that our perspective is one of an observation of the phenomena of life—we look at their causes and their sequence in time. We offer a perspective that we believe is acceptable and coherent within the arrow of the evolutive time and can only be the one of the entire existence of a person, from conception forward.

This is a complex, systemic position of observation with high epistemological coherence; it is tridimensional. Indeed, it sees the whole time of an individual: the relationships, the timing of the relational patterns, the body, the brain, and the mind.

It is a reading with a clinical and analytical view of psychopathology and the unconscious as they relate the philo-ontogenetic time—the time when the incised marks, which are the imprinted signs, of the relationships are recorded on the body and in the evolutive stages. It is the awareness of the biological and biographical history of a person in their here and now. In the light of complexity, this kind of reasoning observes the intelligence of life and sees the person as being a complex, psychobiological living-system that originates from fecundation—the birth of new energetic nucleus—which is the Self, and its relationship with the Other than Self from intra-uterine life onwards. 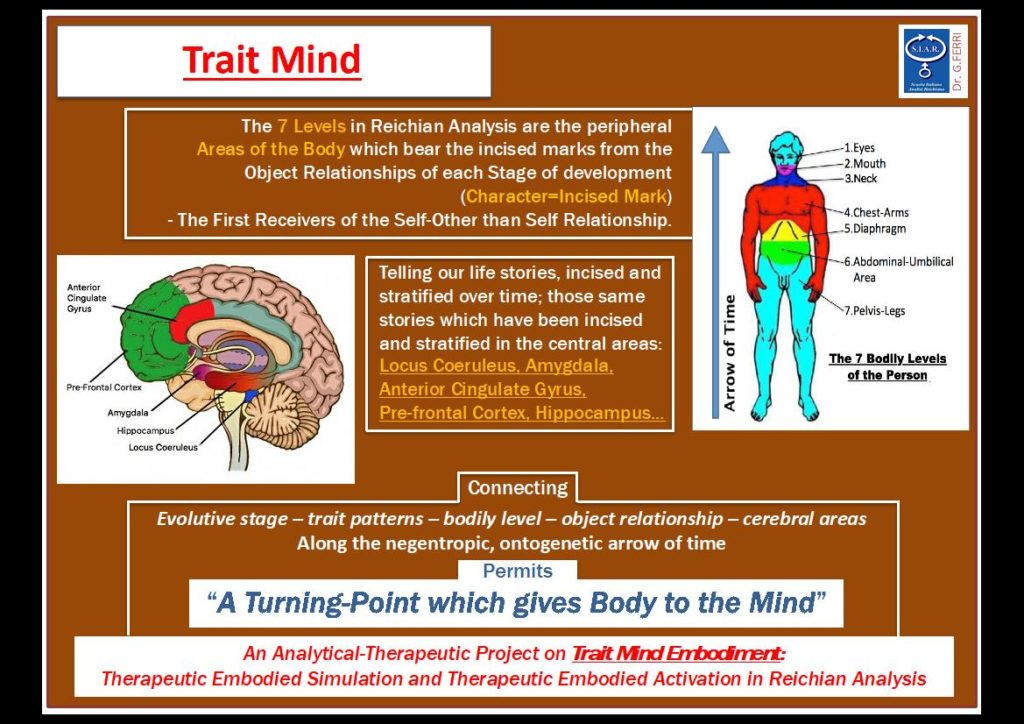 This reading points out that the development of life has an entropic downward direction, from order to disorder. This law of thermodynamics is called, “The Law of the Dissipation of Energy,” and refers to observing the external time, the time of the cognition.

Nevertheless, the development of life also has an upward negentropic evolutive direction, moving from disorder to order (Schroedinger, 1995). It is considered bottom-up when observing the internal time; for instance, the birth of an individual, or the origin of a relationship—the time of emotions, of feelings and of relationships.

Therefore, the psychopathology gets bolder and returns to the analytical channel including the body. In this analytical and clinical model of psychotherapy, we can see three kinds of language: verbal, bodily and relational.

With the inclusion of the body, the primary object relationship—the biological phase of our relationship with the mother—appears in two different analytical worlds. The world inside and the world outside the womb, time of the post childbirth; in both worlds the communication is inter-corporeal and pre-subjective.

The world inside the womb is represented by the intrauterine fluids, the placenta, the umbilical cord, and the amniotic fluid. The birth leads to the outer world, to another bodily relationship, to the breast, to the lips, to the milk, to the air and to the epidermal contact.

Indeed, the oral stage can be subdivided in two distinct time intervals. The first phase relating to the intrauterine time—nine months— the second one relating to the orolabial stage— six months post-birth, liquid nursing.

The rising of the first teeth represents a clear indication for solid food, and with the teeth the weaning begins. Weaning is the second big separation that marks the gradual exiting from the primary object relationship and the entrance into the subjectivity phase. The acquisition of the striated muscle function, the standing position, the locomotion, the stereoscopic-tridimensional vision and the evolution of the motor circuits brought the development of the “I-Subject”.

In order to clarify the concept of the primary object relationship with the mother, we offer some examples.

The fetal movement is the natural way of the continuous and warm dialogue between the mother and the child before the birth (Janniruberto, Zulli & Catizone, 1982).

The mother is the fertile humus where the fetus makes its trades and establishes its first relationships still in a pre-subjective and inter- bodily time. This is the base for a balanced growth and a good biological definition with the mother. In the intra-uterine stage—the phase of the first big mouth—coincides with the umbilical-abdominal area—the prevalent relational bodily level in this period of life, in a bottom up vision.

The dialogue between the fetus and the mother-womb object relationship may be sufficient, insufficient or excessive. Its modality defines the degree of a person’s “primary resilience”, which is fundamental for their evolutive and psychopathological development.

Another example of the fetus mother-womb primary object relationship in the peri-birth interval time: a sufficient (good enough) mother creates healthy contact through her nurturing warmth. This is essential for good myelination through the intrauterine life and for the months after the birth. Indeed, it represents an important basis for an appropriate dialogue of the person with the world as stated by Stephen Porges (2014) in his documentation of the ventral vagal circuit and as highlighted by Genovino Ferri (2016, 2017) through the history of his emotional relationships.

An insufficient or excessive mother could create an alarm or an attachment, and therefore generate an unsatisfied or a repressed orality that could represent a pre-subjective platform for the development of the Borderline Personality Disorder and/or Depression.

We highlight the importance of including the body in psychotherapy, together with the biological and biographical history of the person. Indeed, finding the bodily level—time and bodily stage—in which it is possible to re-actualize one’s pathology, makes it easier to understand the psychopathology and the unconscious underneath. This process permits a more precise diagnostic evaluation.

In this phase a different relational bodily level is prevalent, which is the mouth—the newborn’s mouth and the mother-nipple primary object relationship.

An insufficient or excessive mother could create, respectively, dependency or attachment, as well as insecurity, leading to a regressive tendency in the baby’s growth. This could also represent a pre-subjective platform for the development of eating and/or abuse disorders. In this phase, the sustainability of the mother is not just represented by breastfeeding but is mainly characterized by the quality of her care-giving. In fact, her psychophysical and emotional condition influences her relationship with the baby.

Examples of disruption exist when the mother cannot breastfeed due to anguish, anxiety, post childbirth depression, or any other obstacle to the contact and bond between the mother and her child, from the mother’s side. In this instance, some issues may arise like loss, abandonment, low self-esteem and depressive equivalents.

The examples cited above allow us to review the concept of ‘Embodied Simulation’ within mirror neuron function (Gallese, Migone, & Eagle, 2006).

We view embodied simulation as a specific mechanism through which our ‘brain/body system’ models our interaction with the world. This simulation can acquire a therapeutic character thanks to the reading of the psychotherapist’s counter-transference of their character traits (Ferri and Cimini, 2018). It rises from the unconscious dialogue between the analyzed person and the analyst. This can lead to a more appropriate position of the psychotherapist in the relationship with the person in relation to their needs emerging from the psychoanalytical setting. Therefore, bodily psychotherapy could use therapeutically embodied activations through patterns of actions or ‘actings’ that are ontogenetic movements appropriate to the therapeutic question arising from the setting (Ferri, 2016, 2017). Actings are specifically addressed to the prevalent bodily relational level of that evolutive stage, a peripheral afferent pathway from which we access the central areas in order to harmonize that bodily relational level.

The birthing and delivery process are extraordinary events resulting in a determinant incised mark in the formation of our character, identifying the first real separation in our lives, the passage from the inside to the outside.

It is important to note that an eventual threatened abortion in the intrauterine interval time can represent a vital menace of separation for the embryo-fetus because of its total biological dependence on its mother. So, in turn, we ask: what can this threat cause in placental and in fetal biologic fluids? Do the values of neurotransmitters, biochemicals etc. change? How intensively might a pre-subjective anguish of death be stored in the amygdala (the storage area of fears)? And, could it be a predisposing co-factor in the development of the person’s personality?

Delivery and birth result in different imprints in our biological and biographical history. These imprints indicate the principal modalities and behavioral approaches of our future separations; these elements will also contribute to characterize our primary object relationship.

For example, events of loss and separation of an individual characterized by a first oral stage with low resilience can cause disorganization and alarm. Nevertheless, in individuals with good intrauterine resilience, the fact of having had a dystocic delivery could represent a pre- subjective platform for the re-actualization of panicking issues when in phases of transition and/or could determine separation anxiety disorders.

Including the body in our vision enables us to read the complex living system through different lenses reaching a more precise diagnosis and a more appropriate project with a proper, replicable methodology.

We reflect on how much our “liquid modernity” – slipping through time like liquids, without form or shape, since there isn’t enough time and space to have shape – it is liquefied by the speed (Bauman, 2003) – can today become and represent an incised mark for the primary object relationship and for the peri-natal relationship.

We are living in a time with more instants and less roots, more emotions and less feelings (which are made of time), more excitement and less awareness, more communication and less relationship (that are also made of time), more information and less knowledge. We are more ‘on’ time rather than ‘in’ time, more on the surface rather than in the depths. We are a social living body that today moves towards a reduction in serotonin, the 5HT neurotransmitter, which is associated with affection, and an increase in dopamine (DA), a neurotransmitter associated with action, which is, rather, depression masked by acceleration.

In our primary object relationship, good affective nutrition is fundamental. The lack of time and the lack of nutrition (of quality affective care) could determine an altered bodily expression. This could lead to the loss of the sense of life and of the meaning of the body in the history of the relationships of that person.

Genovino Ferri is a Psychiatrist e Reichian Analyst. Genovino is a Member of the New York Academy of Sciences (N.Y.A.S.) and Director of the Italian School of Reichian Analysis (S.I.A.R.) Course of Specialization in Psychotherapy (D.M. 16-01-2004).

Mary Jane was invited to be the Psychopedagogy director and professor of SOVESP – Society of Orgonomy and Vegetotherapy of S.Paulo- Brazil where she worked for over 20 years. Her experience goes far beyond, and she has been invited to participate in lectures all over the world. Mary Jane has also been writing articles for magazines in Brazil and in 1995 founded, with three other psychologists, the institution IBAR- Brazilian Institute of Reichian Analysis,