William Ferraiolo generously gave SPT Magazine permission to share his recently published paper, Roman Buddha, with our readers. It’s a fascinating comparison between the Roman Stoic philosopher Epictetus (55-135 CE) and Buddhism. He notes that “Epictetus offered practical counsel through which the West may begin to more comfortably approach Buddhism as a system of self-governance and path to awakening. Epictetus’ collected Discourses and Enchiridion offer glimpses of a spirit which Buddhist practitioners will, I think, find strikingly kindred.” 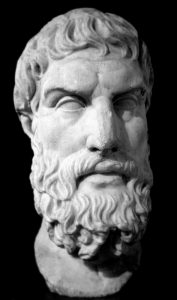 The West has produced intellectuals of the order of Newton and Einstein, statesmen like Churchill, and captains of industry like the Rockefellers and Bill Gates – but what are we to do with Bodhisattvas, lamas, rinpoches, and the rest? It all seems so…“Oriental”. Those Westerners on the religious quest are likely to be drawn to familiar Abrahamic traditions and have no need of exotic spirituality wafting in from the East. Furthermore, the Eastern sages seem, until recently perhaps, to have been in no particular hurry to illumine the barbarian West. There are few reports of Bodhisattvas reincarnating in this part of the world – and if one did, no one would pay much attention (with the possible exception of a few aging hippies and maybe Richard Gere). What inspires “them” is just not going to fly for “us” – and vice versa. There is a fundamental incommensurability in these competing conceptions of the human condition separating Eastern and Western approaches to the “good life”. We should not expect to find large tracts of common ground on which “the twain” may meet to share the wisdom of their respective sages. So goes an all too common misconception on both sides of the putative divide.

This kind of parochialism is misleading, oversimplified, and paints the relevant cultural traditions in overly stark contrast. The West has, I would argue, produced its fair share of (arguably) enlightened beings and, in at least a few instances, they have significantly influenced the evolution and development of Western culture. Socrates, Jesus and Mohammed have obviously left their marks and exhorted billions to reconsider the
human condition, our relationship to the transcendent, our values, and our way of life. I would like to suggest, however, that a much lesser known and insufficiently appreciated figure may be our best hope for finding a worldview within which East and West might encounter each other in a light more felicitous to mutual understanding and appreciation. Just as it is instructive and valuable for Westerners to develop an understanding and appreciation of Buddhism and other strands of Asian philosophy and/or religion, so too is it worthwhile for Buddhists and practitioners of allied Eastern wisdom traditions to become better acquainted with like-minded intellects that contributed to the philosophical, cultural, and religious foundations of the Western world. In addition to the aforementioned figures of indisputable historic and cultural interest, one sage of the Roman Empire stands out for special (and long overdue) attention. The Roman Stoic, Epictetus, may serve as a valuable nexus through which the Buddha’s wisdom could be rendered more accessible to those reared outside of an Asian cultural context. Also, a clearer understanding of practical therapeutic philosophy as developed in the ancient West may be brought to the attention of Eastern practitioners through an exploration of the methods and application of Epictetan counsel. Certainly, in my own case, it was an appreciation of Stoicism and the wisdom of Epictetus in particular, that opened the door to Buddhism and eased those first tentative steps toward concepts such as impermanence, renunciation, and a synoptic ethic of mental discipline. Perhaps, given a bit of luck and intrepidity, fellow seekers from East and West may encounter each other and develop a richer understanding of commonalities intersecting their respective traditions and spiritual heritage.

To read more of this fascinating comparison, please click here

William Ferraiolo, Ph.D. is a professional philosopher, a practicing Stoic, an author, and he has published numerous articles in a variety of professional and academic journals. His second book is available for pre-order at Amazon.