Home Specialized Psychology We are the Movement

“Movement is not something we do.
Movement is who we are.”
Emilie Conrad

“Where there is suffering there is holy ground”
Oscar Wilde

Emilie Conrad was no stranger to fear and discomfort. Growing up in an abusive household, she suffered traumatic exposures and illnesses. Dance became her salvation. Vaudeville led to Katherine Dunham; Dunham technique led to Haiti, where she lived and danced for five years. Her experiences sparked the question that became her lifelong inquiry and work: Continuum Movement.

It’s hard to quantify or categorize Continuum Movement because it’s a practice that literally embodies what it preaches: ongoing change, transmutation and innovation, all in service of evolution.

Unlike somatic practices that become theorized, modulized or manualized, Continuum Movement, also called, simply, Continuum, remains a work in progress, and a practice in process. In a world rife with unexpected and shocking stories of mass shootings, tortured children, and horrific warfare, humans have many opportunities to “lock down” in fear. This lock down may feel emotional and may affect our worldview and belief systems; it is actually a core somatic experience that will influence us at all levels. Fear shapes all our movements in the world. 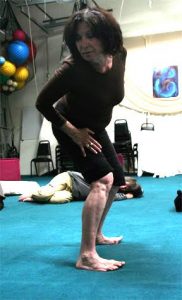 Continuum recognizes that the fundamental movement of life is wave motion. Emilie first noticed this wave motion in the flowing, sensuous movements of Haitian dancers. She recognized the wave in everything that breathes, moves and lives. Her work went on to explore, describe and create a movement practice based on wave motion as a fundamental healing movement, and as a shape that restores resiliency through connection.

As a practitioner of somatic psychology, dance movement therapy, yoga therapy and Continuum Movement, it seems clear to me that Continuum is truly, at its core, a non-verbal approach to therapeutic intervention. It is difficult to describe this fluid, open-ended movement practice in words. Continuum invites our bodies to move in response to sound (including silence); sound and movement exist on the same continuum; that’s why we can hear a hummingbird’s flight. Continuum teaches the increasingly valued skill of interoception through a practice called ‘open attention’. If one considers that life is embodied and that our human bodies are where we think, feel, act and sense, then it may not seem a stretch to consider that a principle that applies to ultrasound therapy also applies to the broader human embodied experience.

Introducing sound, which travels in waves and has a particular frequency, into tissue can increase the tissues natural fluid elasticity (we are, after all, approximately 70{f4ab6da3d8e6a1663eb812c4a6ddbdbf8dd0d0aad2c33f2e7a181fd91007046e} water) and change the density of tissue. When tissue density changes, we move differently. When we move differently, we have a greater range of movement, which expands the sphere of our life experience. The greater our movement repertoire, the more possibility we experience emotionally and cognitively. We have more options for self-expression, for communication, and for how we move, behave, act and take our place in the world.

Bruce Perry (2014) states that “movement changes the brain faster than anything else.” Recent research on mindfulness proves that tracking and observing sensation increases mindfulness (Kerr, et al., 2013) and that interoception is not just a brain process, as previously thought. It is a full body process that significantly informs our embodied awareness (Hindi, 2011). Embodied awareness can be described as our somatic awareness (ability to sense inside ourselves, to feel and know ourselves) plus our conceptual awareness (the ability to express or share with others; “languaging” our experience, which promotes integration and provides connection with others) (Siegel, 2012).

As the field of neuroplasticity, which has demonstrated that experience can change the brain through research focused primarily on mindfulness activity, begins to explore mindful movement, Continuum may emerge as a practice that uniquely combines the skills of mindfulness with movement in a way that promotes healing. change and restoration efficiently and perhaps even more quickly than verbal and cognitive therapies. It may also promote a collective awareness about our interconnectedness and role as part of a greater whole.

One framework that Continuum posits and explores involves anatomies: The Social or Cultural Anatomy; the Primordial Anatomy; and the Cosmic Anatomy. The Social/Cultural Anatomy is our everyday body; the body that is shaped by social constraints, norms and the messages and inputs we “exteroceptively” receive from family and community, and the environment we live and dwell in. Our primordial anatomy is our evolutionary body; the echo of our other species ancestors such as fish, amphibians and reptiles that are reflected in the developmental movement patterns and progression of infants and toddlers (Bainbridge Cohen, 2012). Our Cosmic Anatomy relates to the understanding of the human body as a whole system, and as a system that is also part of a larger whole; this anatomy draws from David Bohm’s work, as well as other theorists from the field of physics and chaos theory. 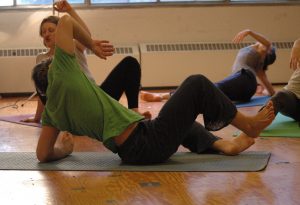