Carl Greer started wandering along a shamanic path close to 15 years ago. Perhaps even longer if you consider his passion for the esoteric, his extensive martial arts training, and a deepening Qigong practice that began well over 20 years ago. Today, at age 74, Carl is walking in yet another reflective dimension—the sense of wanting to give back to the collective consciousness that fueled his journeys into clinical psychology, Jungian analysis, shamanic healing, teaching, and private practice. His thoughts about giving back and how that would look motivated him, in part, to write this book.

“It found me. I found it,” Carl says when asked about grounding his spiritual work within a Jungian analytic frame and writing Change Your Story, Change Your Life. “I was interested in shamanism all my life. I read stories by Lynn V. Andrews (a shaman, healer, teacher, and New York Times bestselling author). But I never felt I was able to pull up and apprentice someplace for eight months at a time. I had a cognitive understanding. I was fascinated. But I never had the experiential. Then, in (the year) 2,000, I read Alberto Villoldo’s book, Shaman, Healer, Sage, and went down the path with him. I trained at his Healing the Light Body School and taught as a member of his staff.”

“Over the years I have gone to a variety of places around the world to work with shamans,” Carl adds. “And over those years, I chronicled my adventures.”

Carl culled a decade of journal entries detailing his experiences. Initially, the stories were jotted down for himself. Writing was a useful tool to help him capture ideas, sensations, considerations, to make sense of all the experiences he was having in the jungles and mountains with various shamans. He knew that he needed to excerpt and refine the material for his book, needed to rein in the larger expanse of his knowing—he could have gone down more paths, he said, commenting that the early drafts of the book involved quantum physics. But Carl knew that he had to be parsimonious in deciding what to emphasize. It was quite a process winnowing the material down, deciding what he wanted to have and then condense it. He wanted to create a balance between left brain ego consciousness and analysis and right brain experiential. His focal point was always his audience: Who am I writing this book for?

Participants in a workshop on Carl Jung and Shamanism, which Carl led, expressed interest in doing further training with him. He decided to teach his workshop participants how to operationalize their transcendent experiences into everyday life—the spiritual aspects of their lives were currently not tied into their day-to-day reality; they wanted integration. Carl noticed that people attending his trainings and workshops as well as clients coming for healing work (be it psychotherapeutic or shamanic) were hungry for ceremony and ritual, for being in nature—nature is transformative, it has its own wisdom, and through it we can connect to our own innate healing.  Yet, figuring out how we can best relate to nature respectfully and cautiously, and move beyond the criticism that this is merely new age “woo woo” thinking, poses a challenge.

“People were stuck in their story. They had no traction in life. I used the story motif in my workshops, and I really got into the flow of writing my book when I decided to base my work on stories. It liberated me. I like stories, we create our lives around stories. Story then became the idea for the book. A lot of things flowed at this point.”

“We all have a story that we can change if we’re not happy with it. I want the book to be a message of hope that it is possible to change. I offer a pathway, not the only way, but a way to do that, which requires using the Ego consciousness to reflect upon what our story is. At first, people don’t want to tell the story that is, they want to share the story they want others to believe about them. In order to make changes in your life, you have to be truthful with yourself first, then you have to take stock of ‘what is’ without becoming emotionally attached.”

You can read more of this article here.

To read an excerpt of Carl’s book on Goals of Shamanism, please click here. 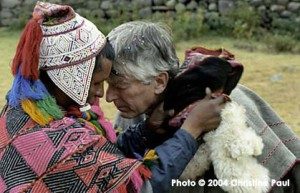