Home Mind/Body/Spirit Re-Imagining Resilience: Taking a Joy Ride on the Wild Side

Editor’s note: The client’s name and details have been changed. Permission was granted to share this story.

Vim reported sleep disruptions, irritability, anger and distorted negative self-cognitions. His negative affect states surfaced when he learned his department at a prestigious college where he had worked for over two decades was to be dismantled, absorbed into another program. At age fifty-seven, Vim enjoyed job flexibility and autonomy that allowed him to provide for his four-member household and work from home. With no recourse, he faced unavoidable unemployment within three months. He was understandably anxious, depressed and scared. He was also out of touch with his resilience.

“Looking for a job at my age is just plain scary,” Vim said. He understood he wasn’t being “fired.” He was personable, intelligent and motivated and able to validate his skills. But still, he had doubts. Childhood recollections exposed underlying forces draining Vim’s confidence yet also revealed a dormant resiliency that might pave the way to success.

Our Past Influences Our Present

Vim had immigrated to the US from Western Europe as a small boy. He survived a harsh childhood with an alcoholic, abusive father and an overwhelmed, distracted mother. Vim explained that he’d flown under his father’s vicious radar by learning to follow the rules. When he was spotted, often for no obvious infraction, Vim paid the price.

Predictability and consistency became vital to his sense of wellbeing. Now, the impending loss of stability propelled him into an old state of fear and vulnerability. Having been caught in the radar of changing university priorities, Vim struggled with the distorted perception that somehow he’d failed.

With positive feelings cut off from awareness, Vim was acutely in touch with self-disparaging fear. Yet, when talking about the pleasure derived from his job, Vim’s mouth turned up at the corners, and his energy felt alive in the room. When he spoke of his anxiety, however, it was as if a piece of his aliveness escaped from his body and was randomly riding around in the room.

I wondered how we might catch this disembodied part and help Vim re-absorb his resilience into a somatically realized experience. As I cast about for a strategy, I thought about a weekend program I was planning to co-present at the Kripalu Center for Yoga and Health in Lennox, MA, in June, entitled “A Woman’s Sacred Journey.” Preparing for this experience, I learned that happiness can be thought of as a process with phenomena of pleasure and meaning and an embodied sense of joy. As Vim revealed more of his story and told me about an upcoming job interview in Boston, it occurred to me that Vim was actually doing what he believed he was too scared to do. How could I help Vim recognize his resilience and find a degree of happiness on this new road of his own sacred journey?

A Story of Triumph 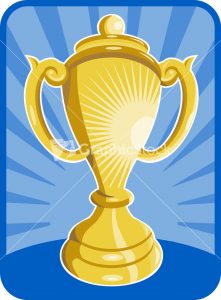 “My mother paid no attention to me,” Vim began. “A good example is the time I won a trophy.”

“The older teens and adult men played chess in the park. They had tournaments. I was good at numbers and knew how to play, so I liked to watch. One day, I don’t know where I got the courage, I asked if I could join a tournament. They laughed, but said yes. I was ten.”

“I played the first man and won. I played the second man and won. And I kept winning! At the end they gave me a trophy. I ran all the way home to show my mother, but she just grunted. I never told my father. I think I still have that trophy.”

“Vim, I have an idea. I’d like to ask you to do something that might help you remember that you have the ability to bounce back from difficult events, that you are resilient. Hopefully it’s not too far out on the wild side.”

“You think you could find the trophy?”

“Vim, you know how after the Red Sox or Patriots win big, they ride triumphantly into town? Well, I’d like you to put the trophy next to you in the car, or in back, and take it on a victory ride to Boston. The trophy can remind you of your courage to risk, to succeed and to be recognized. As you remember, your body can feel the joy of your moment, the pleasure of your victory. This time someone will be paying attention.”

“Me!” he said then added, “and I can still remember how good it felt.”

“Good! Now you can feel that feeling in your interview too, imagining that you can project confidence and competence to those in the room. We can send out those ‘vibes’ you know.”

“I nailed it!” Vim said. “They offered me the job on the spot . . . but I didn’t take it. I have another interview next week for a job I might like better. Oh, by the way, it worked! I found the trophy and put it in the back seat. I could feel it there for the whole ride. I talked to it, and it talked back! By the time I got to the interview, I felt great!”

“I’m so happy for you, Vim. Now, one more thing. As you proceed further into this next phase of your life journey, the felt power of your recaptured resilience can help. If anxiety starts to ride around in your head, how will you refresh confidence and restore this joy?”

“That’s simple,” he said laughing. “I’ll just take my trophy for a short ride on the wild side!”