I see the subway’s lights approaching and I hear the familiar screech of clanking metal as the subway approaches to a halt. Would I die if I were to jump on the tracks right now?

In a given day, an average person has over four thousand thoughts. Some are positive and negative, while others are relatively useless; but a few thoughts are strange, vile, immoral, and random. How could I have possibly thought that? Most people ignore such intrusive thoughts, but for David, his unconquerable thoughts manifested in obsessive-compulsive disorder (OCD).

In The Man Who Couldn’t Stop: OCD and the True Story of a Life Lost in Thought, David presents a deeply intimate recollection of his history with OCD. His obsessive fear of contracting HIV/AIDS began with a lie, which, unbeknownst to him, would later infiltrate almost every single one of his daily thoughts. He was a stone, David explains, but all of his friends were fish. Eventually, all of his friends sprouted legs and moved to land. They grew up. They changed. But David remained as he always was and would be: a stone.

David manages to describe his everyday experiences with OCD in an innovative and enlightening way while simultaneously intertwining his narrative with the accounts of other sufferers, theory, and scientific studies. Thus, The Man Who Couldn’t Stop cannot be categorized simply as a memoir. It is also a book on history, psychology, neuroscience, philosophy, anthropology, and religion. It is an essential read for anyone who has, knows somebody with, or is simply interested in OCD.

He is an engaging storyteller, an environmental activist, and a science writer, all of which are obvious in The Man Who Couldn’t Stop. The reader is left with a better understanding of the neurobiological and contextual underpinnings of OCD, but David’s greatest accomplishment is in his honest portrayal of a person with OCD. He blurs the line between what is “normal” and what is “mental illness.” He humanizes the “girl who eats mud walls” and the “man who washes his hand ninety times a day.”

Sue Roh is currently an undergraduate senior at the Columbia University in the City of New York with a double major in psychology and mathematics. Beyond her course of study, she is interested in international development and founded Save Mae, a non-profit organization that provides medication to the Mae Ra Ma Luang Refugee Camp located along the Myanmar-Thailand border. 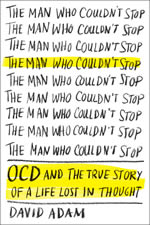