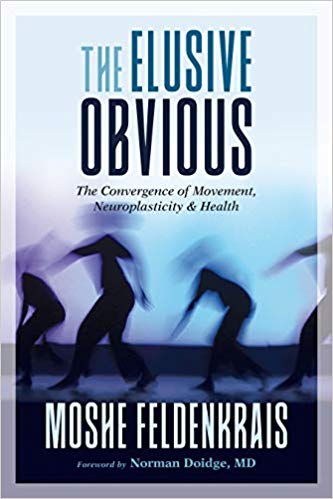 Feldenkrais wrote The Elusive Obvious in his mid-70s, three years before his death, with the intention to offer a “coherent and comprehensive statement of his theoretical point of view” (xii).  His writing style intrigued me, his conversational tone engaging. His conversations about words and movement, about science and acceptance, about learning and awareness pulled me deeper into his philosophical stance on health and healing. He offered that the content only provides information necessary to understand how his techniques work. He deliberately avoided discussing why. “In science,” he wrote, “we really only know how” (pg.1).

Considering my approach to this review, I felt a sense of wonder. What if’s came to mind: What if I tried some of the exercises provided in the book more than once? There are short and more in-depth experientials to help readers ground the content discussed. Would I notice more of a lasting difference other than the ah ha moments I felt in the short term? What if I found a local practitioner to work with this methodology? Would the seemingly never-ending inflammation and pain in my left knee be resolved?

While I can’t say with any certainty, Feldenkrais writes, “You can, at any time of your life, rewire yourself, provided I can convince you that there is nothing permanent or compulsive in your system except what you believe to be so” (117).

Feldenkrais wrote that he doesn’t treat, cure, or even teach people. He says that he tells stories and offers lessons to help people learn about themselves. He believed that learning comes by the experience of manipulation and that learning is the most important thing for a human being.

Learning appears to be a central part of Feldenkrais’ work: “I believe it is more important to learn the way to learn new skills than the feat of the skills themselves” (92). He wants people to consider better ways to move, not right ways, “the right movement has no future development” he wrote (pg. 92). He is clear that successful learning comes when we proceed at our own rate. Being pushed, pulled, and/ or prodded to keep up, to catch up, to meet expectations at a pace that is not ours does not work. We need to discover own rate of learning (pg. 91).

According to Feldenkrais, learning means grasping the unknown
(94) with awareness – meaning a combination of consciousness and knowledge. With mindful living, Feldenkrais wrote, people can tap into awareness and movement to create actions that break what he called bad habits- restrictions in our body and in our movements are caused by habit and learning. In his process, he focuses on “the relationship between movement, learning, emotions and human development” (xii).

A Man Before His Time

Born in a small Russian town, Feldenkrais studied mathematics and worked as a surveyor and map maker. He proceeded to the Sorbonne for his doctorate, furthering his studies in mechanics and electricity. While there, he met Professor Kano, cited as the creator of Judo.  Feldenkrais soon earned his Judo Black Belt.

A knee injury playing soccer in his twenties and a lack of options for healing, lead him to study, discover and learn more about movement and the human body, with his primary purpose understanding the effectiveness of his actions. He developed Functional Awareness (individual manipulation technique) and Awareness Through Movement (a group learning process), based on his practical applications of current science and thought and what he interpreted as the needs of others. He created these methods to approach problems from an entirely new direction. He first used Functional Integration and Awareness Through Movement during World War II (pg. 75).

Some say his work was “before his time” because he ‘knew’ the brain was neuroplastic and he realized that the nervous system was more flexible than other people thought. A key role of the nervous system according to Feldenkrais was to establish order in the midst of a world that has much chaos in it (xxiii); it grows and changes throughout our life (xv). He wanted to help people quiet their nervous system so they could be open to learn. His focus was to help people unlearn unconscious habits and restore the normal developmental process, which may have been interrupted by many different kinds of brain problems in childhood or even before birth (xiv).

Feldenkrais believed that the circuits involved in movement and action could be altered if people learned to refine their awareness of how they moved (xiv). He emphasized that we are capable of freedom, choice, and conscious awareness; and we can use our free choice to change habits.

He offered people exercises to practice how to find the sensations in their body . . . “becoming aware is the significant part of your learning, and it is not at all important which movement is used for the lesson” (pg. 105). He felt that hours of practicing awareness in movement or action remain the most absorbing and interesting time in our lives.

I know my typical review includes more details about the materials presented. This book doesn’t call to me that way. I will offer that the book begins with a Foreword to the 2019 edition by Norman Doidge MD, who came to the Feldenkrais method because of an injury of his own. Next is Feldenkrais’ original Foreword, followed by the preface, the introduction and then 10 chapters. Feldenkrais also included extracts from his interview with Will Schutz (who initially brought Feldenkrais to the United States). To complete the book there’s a comprehensive bibliography, an index, information about the author and final a list of resources.

What felt important to me was Feldenkrais’ philosophical approach and how his writing resonated, what sense stayed with me outside of my notes. This is the kind of book that needs more than one read. There’s depth in each chapter demanding time and space to contemplate, to practice, to explore. I can honestly say I need more time to truly feel as if I “get” it, which I think is the hallmark of a good book. It’s not a recipe, not a template, not a been there done that experience. It feels real, authentic, present and deep. Perhaps I’ll write another review, after a second or perhaps even third read. Time will tell.