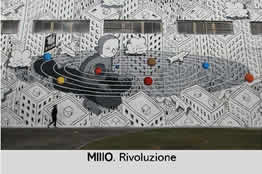 1) Time’s up for the current relational style

Time is up for humanity’s relational style, currently dominant on our planet, with its reactively phallic, defectively insufficient oral trait prevalence, which is ever more borderline and narcissistic. It has produced the entropic collapse in which we find today’s Social Living Body.

We now need other trait patterns and other relational styles, with a different how in our relationship with the Other-than-Self World!

The patterns of the aggressively-possessive “mine!”, of the lack of respect towards the Other and of empathic negligence are in crisis and which, on a larger scale (complex, living social systems), produce obtuse, “neoplastic” riches. These patterns’ blindness means they are unable to envision the entire relationship with the Object, only observing its parts and devouring them.

This blindness does not permit the Other Subject to be felt, being too polarized by their own, beyond-threshold, insatiable hunger.

The Planet is alive and the biosphere, the locus of negative entropy (the 10 kilometers above us is where entropy diminishes) and of photosynthesis (the process through which Life on the Earth originated), can be compared to a closed thermodynamic system.

In the biosphere, the continuous negentropic flux permits the creation and maintenance of the complex, open, dissipative structures which are living organisms.

A “little man”, who has only been in existence for two million years, which is “just now” in the terms of time itself, has been expecting to be able to play with ancient equilibriums. Fortunately, however, nature also has wisdom and its own intelligent limits.

The “Divine Limit” has been reached by some of this little man’s trait patterns and they are worn out! Other patterns are appearing, facilitated by the catastrophic mark incised by Covid 19, which means they shall be seen more and more.

2) Time’s up for independence

We are dependent on the biosphere and we are no other than it. Building intelligently together with our biosphere may, or may not, seem an attractive idea, but it absolutely must be done!

“Dependence-interdependence” is one of those binomials with which we must make peace, keeping it within the “normal” thresholds of its spectrum. Only through these limitations can negative entropy be produced, because moving above, or below, these thresholds would only produce entropy. In reality, living beings and the biosphere are interdependent.

All living beings live in the same space, they are in the same field and they breathe this same atmosphere of planet Earth. Right now, we need the intelligence of a homo sapiens sapiens sapiens and the capacity to Inter-legere, meaning to read interpretatively, through the lenses of Complexity about our responsibility to respect the environment and all the other living systems. In particular, we must really “take on board” our responsibility to respect the Earth itself, from which Life emerges. This is indispensable and will be decisive, first and foremost for ourselves!

We cannot go on producing the climate changes that are making our atmosphere more and more toxic and destroying the habitats of so many living species, which, like us, are inhabitants of this marvellous planet.

Chaotic changes generally favour unpredictable outcomes, but in this case
there is certainly a high probability of “homo”, supposedly, “sapiens sapiens” losing out on any further role in evolution.
Interdependence is a circular process and making the biosphere increasingly toxic produces negative feedback for all living things, including man, who I have no trouble today diagnosing as having a “depressed immune system”.

The term “toxic” is also sadly appropriate, because the word “virus” itself etymologically means “toxin” or “poison”.