Anna Halprin: Dance, Process, Form details the life and work of dancer and artist Anna Halprin. Halprin was an early innovator in dance therapy, using the medium as a form of personal exploration through artistic and physical expression. Her work with groups of people, either for specific art pieces or in experimental workshops, was highly influential for the development of both dance therapy and avant-garde expressionism. Notable particularly amongst psychotherapists who incorporate bodywork and bioenergetics into their work, the principles behind Halprin’s artistic perspective and undertakings remain highly relevant to those fields. Focusing on the cultural and historical influences that characterized her early development as an artist, the authors also discuss the underlying concepts that made her approach to dance unique and therapeutic. For professionals who already incorporate similar dance-related therapies in their work, the analysis for bolstering treatment outcomes may be helpful. The book also gives some detailed background information for those interested in Halprin—her work, expressionism, and dance therapy in general. 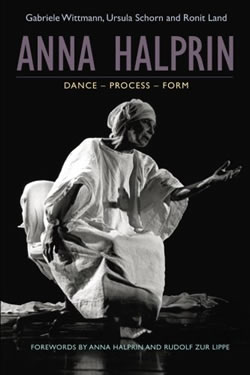 The book is composed of five chapters, three of which are followed by closing “dialogues,” or critical interviews that discuss the broader scope, issues, and applications of Halprin’s work as they relate to preceding chapters. The book opens with an examination of the life and work of Anna Halprin, discussing it generally and in the context of the social and artistic movements of the nineteen-forties, fifties, and sixties. The next part of the book discusses her “life/art process,” which details the essential building blocks for Halprin’s creative and artistic actions. The following dialogue discusses the critics of Halprin’s work and why, as a figure, she is sometimes not widely regarded as an artist nor as a dance innovator. The next chapter takes that initial dialogue and segues into her global reception, both in the psychology field and the art and performance world. It discusses, after this, the challenges of being on the boundary between art and therapy, significant because Halprin regarded herself and work as purely artistic in nature, albeit informed by psychology and the theories of psychoanalysts like Fritz Perls. The next chapter discusses the limits of expression, and how the “life/art process” can function in a therapeutic setting. This includes a dialogue about emotionality in teacher training within a multicultural context. The final chapter covers Anna Halprin’s work in dance education. The book closes with an extensive list of her notable works and references, making the book appealing for use in research.

You can read the full review here.

Ursula Schorn is a gestalt therapist, independent practitioner, and director of advanced training in art education and therapy.

Ronit Land also trained with Halprin and is director of the dance department at the Remscheid Academy in Germany.