“He allowed himself to be swayed by his conviction that human beings are not born once and for all on the day their mothers give birth to them, but that life obliges them over and over again to give birth to themselves” (Márquez, 2007).

It’s late afternoon and my friends and I are making our way along the beach connecting Polzeath and New Polzeath in North Cornwall. We have been wandering for hours. We check our watches—we’re late—and start to run, joking, giddy with sugar highs from eating candy canes. We’re suddenly in the midst of swirling tides, waves from all directions—not knowing whether they are coming or going—the strength of the undercurrent tugging at our ankles, the unforgiving rock face ahead of us too steep to scramble to safety. My senses are scrambled as I remember. Jokes are replaced with concerned yelps as we hop about trying to find shallow water and to avoid rocks. We piggy back the youngest of the party who starts to cry. It is unknown and suddenly dangerous; all the giddiness is gone. If we had been any later, we wouldn’t have got through.
I’m reminded of another watery memory I found myself recounting at a conference workshop I facilitated last weekend, also in Cornwall, this time at the Eden project. I invited participants to tell their ‘earth stories’ through sharing glimpses of my own. I included images of particular landscapes and seascapes, animals and flora and fauna, which have been significant in my earth story, one of them being Trebarwith Strand, a shallow-shelving beach barely 10 miles up the coast from Polzeath. 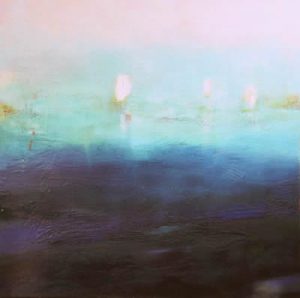 I recounted body boarding here when I was 13 years old—one of my favourite things at the time— and being dragged off of my board, thrown head over heels and dragged along the sharp rocks of the sea floor. I emerged shocked and sobered, gladder than ever to catch my breath and to turn to see people on the shore’s edge. I have always felt awe for the sea, and that day it was amplified, with the sore bruises across my hips and thighs cautioning me of the sea’s strength.
“Birth memories, deeply hidden in the unconscious mind, usually announce themselves indirectly. They appear in association with some triggering event, such as watching people fall through space in a movie, seeing someone pinned down in a fight, or perhaps just watching a fish wriggling and struggling on a fishing line. The extreme feeling of anxiety stirred up by these events calls attention to the significance of the memory hiding at deeper levels of consciousness” (Chamberlain, 1998, 92).
Birth memories often emerge in relationship to the sea for me, with its undercurrents, turning tides, rocks, and possible danger. Apparently, I have a very ‘Neptunian’ influence in my birth chart; I’m no astrologer, so I’m not sure what that means. Once I had recovered from my early terror of water and fear of disappearing down the plug hole when I was bathed—yes, really, much to the sadistic delight of my older brother, making sure I would be seated at the plug hole end whilst he sat back and enjoyed the drama…! I loved being in water and spent literally hours swimming, messing about, floating, body boarding. I think, for me, a triggering event, in Chamberlain’s words, was recalling the body boarding memory at Trebarwith Strand.

Changing tides are the themes that merge as I turn my attention towards engaging with this final print version of Somatic Psychotherapy Today about pre and peri-natal psychology. It is a timely theme, given that life has been punctuated by endings and beginnings of late. Four friends have died—three pretty suddenly—and I’m in the process of amicably leaving the Buddhist movement and order of which I have been a part for the past 21 years. In June I finally started being treated for two long-standing health issues, and I am feeling better and have much gratitude to the medical world, after, I confess, much ambivalence (we didn’t get off to a good start—when I was on the final module of my pre and peri natal training I had one of my most profound and mightily unexpected spiritual experiences holding some high forceps in the palms of my hands as I might an objective of infinite value or beauty). It has been a phase of thresholds; the unknown and unknowable. I suppose that as things draw to a close, as people die, or even as we move between things, our earliest echoes—our experiences in the womb and birth canal—are evoked on a visceral, if subconscious level. No wonder I feel a bit stuck for words and all at sea as I attempt to string something together, which has a faint hope of making sense.

“Let nothing disturb you
Let nothing frighten you…”
(St Teresa, see SPCK)

St Teresa of Avila counsels, very wisely and helpfully, her words leaping off the page of the order of service at my friend’s funeral last Friday week. Roy was my first spiritual teacher, the second vicar I met at my local parish church as a girl. It’s uncanny to be reflecting on my early connections with spiritual practice and the stage I find myself in right now, leaving my spiritual home of more than two decades; a spiritual death of sorts. I hope that there will be some sort of spiritual rebirth after this in-between crepuscular space, but I can’t know for sure.

To read the rest of Kamalamani’s article and see more of the amazing artwork accompanying her story, please CLICK here