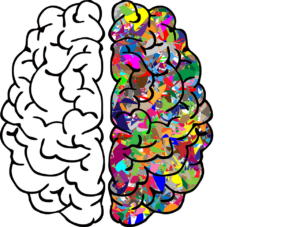 Schizophrenia is a chronic brain disorder that affects about one percent of the world’s population. It has been defined as “a splitting of the mind” from German shizophrenie, a neologism coined in 1908 by Swiss psychiatrist Eugen Bleuler (1857-1939). It also stems from the Greek skhizein meaning to “to split” (schizo-) + phren (genitive phrenos) “diaphragm, heart, mind”, including concepts associated in ancient Greek thought with the human mind.

When schizophrenia is active, symptoms can include delusions, hallucinations, trouble with thinking and concentration, and lack of motivation. Research is leading to new, safe treatments. Experts are also unraveling the causes of the disease by studying genetics, conducting behavioral research, and using advanced imaging to look at the brain’s structure and function. These approaches hold the promise of new, more effective therapies. Neuroplasticity, neuroscience’s latest paradigm, may attempt to correct the abnormal integration across large scale neural networks associated with schizophrenia with methods like meditation.1

While science is unraveling Schizophrenia in its realm, in Japan (2002) schizophrenia is being renamed as an “integration disorder” and in Korea (2011) as an “attunement disorder”. The Korean word “attunement” is related to the Buddhist metaphor of the mind functioning as a well-tuned musical string instrument. The name changes were motivated by recent neuroscientific findings that associated schizophrenia with a disorder of neural networks and to combat the stigma that schizophrenics suffer in society and encourage more humane and optimistic treatments.

Between 1988-1990, I experienced two one-month psychiatric hospitalizations following the emergence of my first psychotic symptoms. During one of the hospitalizations, while psychotic, I stole my mother’s credit card. I intended to escape from the hospital and fly to Buenos Aires; I hoped to use the card to finance the trip. My father, a doctor, and my brother, who was a psychiatrist, were living in Buenos Aires at that time. Unfortunately, I was unable to escape. Since that time, my diagnosis has been schizophrenia and PTSD. 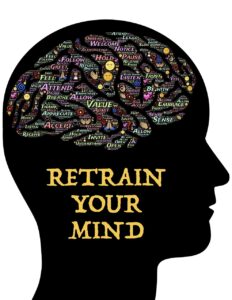 Experts tend to group the symptoms of schizophrenia as “positive” or “negative”. Positive symptoms are the active but abnormal psychic events, such as delusions, hallucinations and also erratic movements and speech; negative symptoms, on the other hand, refer to things that are lacking, such us affective flattening, lack of interest, motivation, communication, and poor cognition.

Positive symptoms are the primary cause of many schizophrenias, and the side effects of some medications can be a source of frustration. I believe that it took ten years of intensive psychology and medications to fully “resuscitate” my psychotic symptoms and other memories. Treatment with the rarely used medication clozapine was also key in helping me rebuild my life. As of today, I have taken clozapine for twenty years with no relapse.

Six years ago, I found another welcome turn in my life: I started meditating daily. I hope to strengthen my mind and believe that mindfulness has been important in my recovery.

Meditation, complementing modern medicine, is said to control both positive and negative symptoms by potentially integrating the brain towards a state of total calm, with attention directed activating and strengthening the nonconceptual, “silent” parts of the nervous system, which are mostly devoid of positive symptoms. Could neuroplasticity calcify that calm? 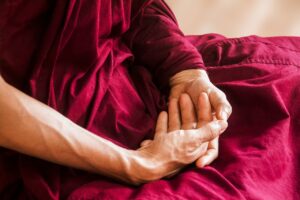 Meditators learn to feel the primordial breathing movements of their diaphragm and their heartbeat. A unified position and stillness of the hands is meant to extend to the mind. The breath is followed attentively during long periods of time, while the rest of the body is also still: a somatopsychic method.

In Zen Buddhist meditation, one searches for samadhi. Samadhi is a Sanskrite word that embraces a state of consciousness treasured in Indic meditative traditions. The root words of samadhi, sam-a-dha, can mean “to bring together”; sam, “together”; a, “toward”; stem of dadhati, “puts, places”: “a putting or joining together”; dhi can also refer to “intellect”, or “consciousness”. The Tibetan ཏིང་ངེ་འཛིན་, tingédzin means to hold firmly and unwaveringly from the depths so that there is no movement. Similar definitions appear in Chinese, Japanese and Korean.

In Buddhism, it is associated with unifying and calming the mind in diverse ways. The late John Daido Loori Roshi, a Soto Zen teacher, said, “Samadhi is a state of consciousness that lies beyond waking, dreaming, or deep sleep. It’s a slowing down of our mental activity through single-pointed concentration”: a certain relief of schizophrenia’s feared positive symptoms. Samadhi can refer to both the practice and the state of meditation; it can also include the practice of Mindfulness, the secular psychotherapy of Buddhist origins that is expanding throughout the world.2

For the past five years I have maintained a regular meditation practice to mediate my schizophrenia related symptoms. Every morning I do a Zen session of about 45 minutes. My first Zen teacher once told me: “If you maintain your hands still and unified during your meditation sessions, your brain and mind shall follow.” My aim as a meditator is to find and prolong a default mind state without delusions and hallucinations; in my experience this results in a flowing, present centered and even joyful mind. Applied to schizophrenia, this means that having subdued the positive psychotic symptoms, I may also conquer the negative symptoms with an optimistic, healthy mind.

When I recall the entire process that I went through over my difficult ten years of illness, I consider my being alive and even thriving as a great miracle.

Lucas Peluffo was born in Buenos Aires, Argentina in 1963, and emigrated to the US when he was 14. As a child, he recalls that Argentina was not a safe haven in terms of democracy and freedom of expression. Yet Argentina has, over the last few decades, become safer for its citizens. To this day, Lucas loves to spend time in Buenos Aires with his family members who remain there. Lucas currently works a job as a secretary in a medical center and is a freelance translator. He is fully bilingual in English and Spanish and has worked as a translator for twenty years. In his spare time, he writes and composes collages.

Retrain Your Mind Image by Gordon Johnson from Pixabay

Meditation Image by truthseeker08 from Pixabay