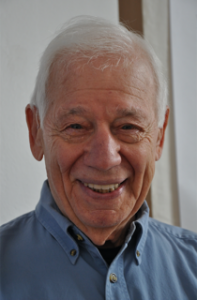 I wonder is this part and parcel of aging?
That which used to give certainty no longer does.
In its place is a porous pulsatory march of slower meandering
heartbeats unfamiliar new experiences of me (pg. 38)

I’ve encountered Stanley Keleman’s work many times during my transition from teacher to therapist. And, I can honestly say I always walk away with a deeper sense of me in my entirety, me as embodied energy in human form, shaped as much by thought and reflection as act and reaction. An awareness lingers beyond the momentary meeting that tugs at the corners of my existence as if saying, come on, wake up now, be present in this body of yours and let it inform you just as you inform it.

Whether I’ve experienced Keleman through his theories on Formative Psychology, his writings and drawings on emotional anatomy, or interviews for articles I was writing, I was struck by his pace, his resonance, his ability to be within himself and yet within me as well. There’s a cognitive knowing as well as a bodily sensation that occurs when I meet a master teacher/practitioner who lives the content they espouse; when no differentiation exists between theory, practice, teachings and the person, I know they are genuine.

When I received a copy of Keleman’s latest book, Forming your Aging: Porosity and Poetry, Essays in Formative Psychology, I had a sense that once again, he—his writings and beliefs—had the potential to challenge my current state of being, perhaps offer enlightenment into my aging, and my parents’ aging process. He poses questions on page 62 that I believe form the underbelly of the book:

Keleman offers readers insight as he both ponders his aging experience and speaks directly to it. At age 86, he is “still writing, still working, still thinking, still penetrating into the hidden and unspoken truths of human experience trying to get them down and right in a way that satisfies his sense of truth and also allows others access to them” (pg. 1).

He shares his discoveries about aging and he is quite clear that, at its root, aging is not about loss, not about what is missing or what has gone wrong/bad but rather what opens to us; how, as older adults, there’s awareness that our body structure has changed and that we can embrace the process. “To act formatively is a special way of being in the world. It means learning to be a different adult, not a lesser adult, but a different adult than in an earlier age” (pg. 53).

According to Keleman, at the heart of the human organism, life is a formative process. His Formative method teaches people how to use motor acts to change body shape, which changes their experience. Keleman shared in a previous interview (Eichhorn, 2014) that, “The body first follows an involuntary inherited genetic program; however, the body also can voluntarily differentiate inherited acts that then become synaptic organizations and muscle cortical behaviors that are not predetermined. Voluntarily influencing the body that nature has given and the memories we make in the process of doing this become our personal body and our personal life. From conception on, the body’s intent is to form itself.”

“As adults we can use the body’s formative process through voluntary effort to form new shapes, new memories, feelings and relationships. As acts become more and more differentiated and voluntary, people learn to give words and personal expression to their experience” . . . “For me,” Keleman shared, “the psychology of the body can only arise from the experiences of the body itself. My dictum is: Form yourself or be formed by others” (Eichhorn, 2014, pg. 10.)

In his latest book on aging, Keleman once again invites curiosity, a stance of wondering and experimentation to self-form. He notes that there is a “special kind of empowerment that comes from learning the skills of self-forming, it is a force that creates meaning and deepens satisfaction” (pg. 10). Where one might note a change in behavior, Keleman suggests an inner dialogue. For instance, now that my reflexes are slower, how do I adjust to that?

Each day allows time and space to re-educate ourselves about ourselves—be it different ways of walking to maintain balance, different digestive needs needing dietary changes, changes in hearing that alter how we listen and respond in conversations and so forth. Rather than feeling victimized and struck down by age, Keleman offers that we have the chance to “form a different way of being that is very personal and is different than the younger vitality you remember” (pg. 53).

According to Keleman, there’s scare attention directed toward teaching older adults how to adapt to current changes in their body structure. What is needed, he writes, is a somatic practice of voluntary effort to train/educate people how to have a different body in daily life and how to move with this new experience. To begin this process of self-forming and re-educating, Keleman offers five steps that comprise what he currently calls The Body Practice. People, he notes, often do not know how to change their behavior or feeling. Understanding experientially how to organize a behavior, that there is a sequence of steps between the beginning and the completion of an act, is about learning to increase and decrease the muscular intensity of an action. To ‘do it more and do it less’ is voluntary self-influence. Self-forming is the voluntary influence of inherited patterns of action. Keleman calls the intentional action by which a person engages these steps voluntary muscular-cortical effort (VMCE) (pg. 10).

1. Notice what is and give your experience a muscular shape.
2. Slowly differentiate your shape by increasing and decreasing its muscular pressure or intensity.
3. Pause. Wait for sensations and feelings to inform you.
4. Practice. Repeat Steps 1-3 to stabilize and solidify tissue memory.
5. Take new form into your world.

“The ability to remember, reassemble, edit and rebody experience is at the heart of growing a new dimensionality of human experience and embodying its values. Each persons lived anatomic history is the narrative forming the different somatic shapes of their embodied existence. Voluntary participation in the body’s forming process is the tool to investigate and develop the world we are, and the one we are forming even when we cannot know for sure what the outcome will be” (pg. 7).

Per Keleman, the body organizes motor/emotional maps of actions in the cortex. Pulsatory excitation become motor maps that set the body’s action patterns, which form a library of differentiated acts in the cortex, then down the line to associated muscular behavior patterns. The brain is action oriented. A feeling or thought is about an act or the inhibition of an act. It is not about the brain controlling the body, rather the cortex differentiates inherited behaviors. Inherited patterns need to be aroused so they can be differentiated, however sooner or later we all learn that immediate expression of an inherited instinctual behavior may not be in our best interest. Thus, it is time for change. For example, how one used to get in and out of a chair may no longer work.

I’ve noticed many such changes in my parents. For instance, my mother, age 88, now backs into the car to sit down. First, she reaches back for the seat, then she uses the latch where the door closes for support to lower herself down. Once seated she swings her legs in. To get out of the car, she now swings her legs out, reaches out her hands to meet my father’s waiting hands (age 89), who encourages her to “use her legs” to stand up rather than trying to push herself up using the door latch which was creating strain in her upper arms and subsequent pain. Every day there are minor and occasionally major adjustments in how they move, how manage takes, how they interrelate with one another and their world. They live quite differently today than in the past.

Watching my parents as they experience all these changes, I noted that Keleman echoes what I’m witnessing. My parents’ younger years were spent creating community (financial, professional, family). Today, their emphasis, as Keleman writes, is toward developing inwardness. “Intentional rebodying in this phase of life means creating experiences that permit you to form a different, more complex interior structure. It is a shifting and differentiation of anatomical structures and organization, similar to the multi-dimensional world of quantum dynamics, which allows you different experiences and different values” (pg. 63).

The body is a poet giving
expression to the organizing process
of our inherited and personal life.
players at the interface of
living and dying
many shapes forming a personal
existence within one life (pg. 26)

Keleman’s narrative is as poetic in sound and sense as his poetry. His language, rich in the verbiage of his theory and that of the human body, immerses readers in textual content that is aided by poems scattered throughout that summarize as well as extend the text itself. The body, Keleman writes, is a poem, “an actual mystery of appearances welling up from the primordial potentiality, soaking eruptive magma cooling into warm migrating plush seminal fluids. This conceiving archetypal architecture marries metabolism and structure to form a self-organizing sentience of potentiality” (pg. 30). I read and reread lines for the sheer sake of appreciation and wondered: How does he write with such aliveness?

The essay titles appear to present a linear process, steps taken, awareness gleaned that allowed Keleman to move from one discovery to the next. After the preface, he begins with Age’s Conception: Soaring Inward. We move to, I Have Arrived: The Eighth Decade, where he asks: “How will I live the inherited biology that shapes me, which it surely will? (pg. 15). There are essays on: Aging; Aging is Growing a New Identity in Ourselves; The Cortex is the Body’s Formative Organ; Forming is the Zygote of Understanding; Cortical Influence and The Gift of the Elder; The Inner Body and Self-Intimacy; Rites of Passage; The Tides of Acquiring Age; Every Day Is a Birth Day; Slow; Slower Going Forward: A New Vision of Growth and Identity; Late Life; I Wonder; Managing the Porosity of Late Life; Tidings of Being an Older Adult; Evolving an Older Age Shape; Intimacy: The Homeland; and Transitions and Forming Personal Meaning. The final “essay” in this book, Living Your Older Age, is an interview with Leila Cohn, the founder and director of the Brazilian Center of Formative Psychology, that was adapted for use here.

I personally gleaned more understanding about Keleman’s cognitive experience of aging from the interview, which in turn helped me when I went back to reread essays. I appreciated the conversational tone and information that then guided me as I entered the more experiential essays. Not being trained and practiced in Formative Psychology and all its understandings and beliefs meant a slower reading and digestion pace to “get” the depth from which Keleman writes.

It is this very depth that positions Keleman’s short essays outside the genre of traditional self-help or psychologically themed books on aging. His wisdom transcends simplicity, expands beyond prescriptions professing to make life easy, better, more palatable. In fact, I think he offers the means to form a new self every single day, if one is intrigued, if one wants to embrace the fullness that life at any age has to offer.

Transcendent longing
is the reaching out to
touch a bigger life
and finding that it is
in oneself.

Every embodied expression
is a celebratory
kiss of contact
that ends the
searching (pg. 44)