I had just gotten my first job at Kent State University Counseling Center after finishing my course work at the University of Kentucky and my internship at Wake Forest University. I lived in the Shaker Heights district of Cleveland and was driving down Route 480 that turns into Route 14 toward work at Kent when I was struck by a deep wave of depression. I felt like I used to feel earlier in my life. At some point I got off the road onto the sideline and just sat and was struck by the deep dark feelings of depression I was having and could not understand why that was happening. Here I was, having achieved what I was searching for my entire life, a position as a psychologist, and I was so summarily bummed out. After catching my breath, I continued driving to Kent. 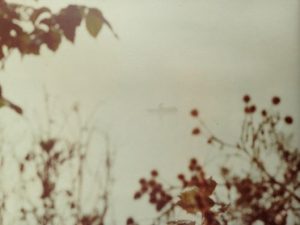 Then an unusual event occurred when I was passing through the city of Twin Lakes. It was foggy out. The lake was barely visible. But on one of the lakes, just through the dense fog, I could perceive a rower in his boat. It was so striking to me that I had to stop. Amazingly enough I had my camera with me. I pulled it out, got out of the car, took his picture and then continued to work. At the time of this event, the thought did not strike me that perhaps I identified with that rower in the midst of the fog — my old feelings of depression.

Once I got to Kent and focused on work the depression lifted. On my way back to Cleveland on Route 14, I was contemplating, which I often did on the drive to and from work. My thoughts turned to the depressive episode in the morning. I was no longer feeling depressed on the return trip. I was struck by the fact that in spite of feeling depressed earlier, I stopped to exercise my creative abilities and took the photograph of the fisherman. And during the day, I did not remain depressed. I did work demanding higher order reasoning, knowledge of human behavior and emotional wounding, as well as compassion. What happened in the morning was an unusual and temporary setback. It was a pseudo-setback not characteristic at all of where I was in my mental health and functioning.

As I continued to drive, another set of thoughts came to my mind. Perhaps, precisely because I was in a new and higher functioning state of mind, I was able to get in touch with feelings that I had earlier in my life that I could not cope with or did not know how to cope with at the time. And precisely because I was stronger, those feelings were percolating or discharging from my unconscious psyche. I was discharging old psychic debris. Indeed, what happened in the morning was not regression but a pseudo-psychic-setback occurring precisely because I was stronger. And the late breaking news was not that I was having a setback, but I was in a new developmental state of strength. And if I tried to use my former coping mechanisms with this new state I was in, it would only set me back. I had to create a new way of coping with the issues of the past, as well as those of my new state of being. My job at Kent State felt like a wonderful achievement. I was married. But my graduate education in Lexington, Kentucky was a long, lonely haul. That was the origin of Ol’ Doc Kisch’s Pseudo-Psychic Setback Theory. I was Young Doc Kisch back then even though I called myself Ol’ Doc Kisch.

Periodically I have clients come in feeling depressed, complaining of regression to early stages in their lives. I enquire to get a larger picture of their realities. I discover many signs of growth, strength, and achievements that never existed earlier in their lives. In their doldrums these clients ignore or discount the positives, only perceiving the negative. The positives become experientially non-existent. It is then that I share with them Ol’ Doc Kisch’s Pseudo-Psychic Setback Theory. My articulation is sufficiently humorous, so they listen with an open ear. When I point out their progress and many achievements, they recognize the truths in what I am saying about their growth, and they put aside their negativity. And I get new converts to my theory.

Next time you are feeling down, entertain my hypothesis. You may be getting in touch with old negative feelings precisely because you are in a new stage of development and you are strong enough to deal with what you were unable to deal with in the past. Then you may have to start talking to yourself differently. You have to give yourself what was not given in the past — recognition, confirmation, appreciation, realistic praise, celebration, perhaps even reward and love.

Diane is a seventy-four-year-old retired chief-operating-room-nurse. She was referred by her massage therapist after having shoulder surgery for a torn ligament in her left shoulder following a fall. Three months following her surgery she continued to suffer from restricted range of motion and pain in her arm. The gentle movement of the Trager® technique was used to determine whether there was physical holding contributing to Diane’s pain and restriction of movement. When tested for somatic holding patterns she revealed bracing in her neck, shoulder girdle, arms and legs. Her whole body was tied in a knot.

Using applied kinesiology and muscle testing as applied via the Walker NeuroEmotional Technique (NET), Diane did not show an underlying NeuroEmotional Connection (NEC), a psychophysical holding pattern, regarding her fall. However, she did test for a positive NEC regarding her surgery. Testing further revealed fear was associated with the surgical procedure. When asked about this response she indicated from her experience in the hospital she was well aware of the many complications that could result from surgery. Unconsciously she held on to this fear even after the successful completion of the surgical procedure. After the NET procedure, the holding in Diane’s neck, shoulder girdle, arms and legs released. She had increased movement and no pain. Her emotional-physical holding patterns apparently had been hampering her recovery.

Ronan M. Kisch, Ph.D. is a clinical psychologist in private practice in Dayton, Ohio. He is a Trager© practitioner, a Certified NeuroEmotional Technique Practitioner and holds an advanced certificate from the Santa Barbara Graduate Institute in Somatic Psychology. He is the author of two books and a contributor to Somatic Psychotherapy Today. He believes the psyche is not merely in the left brain. To unlock and transcend psychological trauma one needs to address body, mind, and spirit. He can be contacted at: d1153@sbcglobal.net.