How do we embody words and ideas? The written word in general, and specifically in psychotherapy literature, struggles to embody. Ideas are indeed alive in the body, yet their ink form (even more so their pixelated form) is oftentimes floating, stirring thoughts and even more ideas, becoming distant from breath. I am never sure how possible it is to write in a way that maintains connection to the body, and to someone else, while still offers rigour of thought and style. Perhaps, relationships can help us embody ideas; perhaps ideas that emerge from connection could be grounded in the embodied relatedness therein.

From the introduction to Speaking of Bodies (Rolef Ben-Shahar, Lipkies and Oster, 2016):
Throughout his earlier life, Pinocchio’s fantasy was to become real; to assume a human form, to have a body. Why bother? Why give up eternity to have a body? Why suffer illness and death, be dependent on our decaying organic matter? Why did Pinocchio make such an effort to become a real live boy?

We are born into bodies; our being is incarnated in the flesh. Our arrival into the world is a highly bodily experience, as is our departure, when our bodily organism ceases to function in a spirited way. And in between, every encounter, every meeting, every relationship, is saturated with us-as-bodies, with sensations, movements, gestures, and perceptions that stem from the body and move through the body. It is part of our developmental task to consciously claim ourselves as bodies.

We are born into bodies but also have to earn our bodyness. Many years after Pinocchio’s inevitable death, a conversation took place between one Mr Savage and the world controller Mustapha Mond (in Aldous Huxley’s Brave New World, 1932). Mr Savage challenged the convenient life held in their world:

“But I don’t want comfort. I want God, I want poetry, I want real danger, I want freedom, I want goodness. I want sin.”

“In fact,” said Mustapha Mond, “you’re claiming the right to be unhappy.”

“All right then,” said the Savage defiantly, “I’m claiming the right to be unhappy”.

There was a long silence.

Huxley’s Savage strongly claimed his vitality, his spirited freedom, his emancipation. He did that defiantly, but not naively, mindful of the grave price he paid for wanting this freedom, for wanting this body. Pinocchio’s quest was similar. Perhaps, to have an idea of what both were so adamantly fighting for, we can turn to phenomenologist Maurice Merleau-Ponty (1962), who argued that the body was our medium for having a world.

Pinocchio wanted to have a world. It was the blue fairy who, by granting him a body, gave him a world. Mr Savage too wanted to have a world; and he needed a body for that. “We become embodied, it seems,” wrote body psychotherapist Nick Totton (2005), “in order to temper our being, as a sword is tempered by plunging it red-hot into water. The plunge into matter defines us” (p. 170). These two aspects of our embodiment, the given body and the acquired body, accompany us throughout our lives, and will accompany us throughout this book. 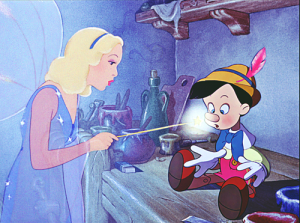 The psychotherapeutic and psychoanalytic encounter engenders deep and meaningful dialogues, fosters growth and curiosity, bringing about change and healing. The three of us, Noa, Liron, and Asaf, have initiated this project out of our shared passion and excitement about bodies and relationships, within therapy and outside of it. Our passion enticed a curiosity: can we bring the body closer to therapy and therapy closer to the body? We sought to bring together the rigour and healing of psychotherapy alongside the creativity and boundlessness of other fields that involve and relate to body. In essence, we wanted to facilitate dialogues about some exciting facets of being-us-as-bodies. We aspired to provide a platform for a meeting of worlds, for cross fertilisation that resulted in an aesthetic, generative, and healing relationship. This book is unique, since it is the fruit of meetings and interactions of people who all share a deep passion and commitment to their embodied being, and invested in supporting others in their journey to become bodies-in-relations. This book is, therefore, a tribute to the blue fairy: it celebrates, mourns, blesses, and sponsors our embodied being and our embodied relating. (pp. xvii-xix)

Speaking of bodies was born on a whim, out of a desire for connection.