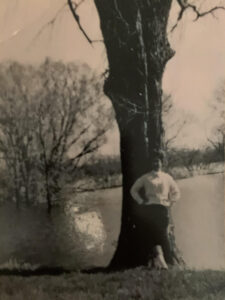 My mother’s life was not easy. She dealt with and battled domestic violence, child abuse, suicide, and eventually mental illness. She was affected by and surrounded by the nature of mankind’s cruelty. And yet, she gave my siblings and I her gift of strength.

In writing The Shattered Oak, I came to terms with her thought process and experienced her level of bravery and reliance. I finally comprehended her intense strength, courage, and determination by acknowledging her survivor skills and her deep love of faith that provided her comfort that she was never alone.

As I wrote her story, I was able to put my mind at ease because I knew the content and the nature of her story, nothing was made up. I knew her circumstances and her reality intimately—I was there. When writing, I chose words that exposed the dignity, integrity, and honesty that captured my mother’s essence. In this light, I decided to have my mother, Barbara, narrate her story, letting the content come from a third person rather than a first or second. I felt the impact might reach out and grab readers by the collar and bring them into the story.

And, as readers became enveloped in her story, I hoped they might experience a sense of enlightenment in the realm of empathy and be offered an opportunity to get outside of themselves and see things from a different perspective. Throughout the book, Barbara never tries to teach (and absolutely does not preach) something. Her voice shares her “experience, strength and hope”, as opposed to just giving suggestions.

She was and is a survivor, and in that way, a role model. But more than just surviving, she has become a student of life—someone who learns as they move through life. For our family it is never about being right (as opposed to wrong); focusing in the present moment as much as is humanly possible, we all try to do the next right thing.

I encountered some challenges when writing that I had to learn to overcome. My mind was always engaged and constantly focused on my content. It was hard for me to be physically present in the room because writing consumed, mesmerized, enchanted me. During this time, I listened to every word spoken on the radio, including song lyrics, and even nouns and verbs in conversations. I used my skill as my own secret weapon. I wanted to know what words were more powerful and best described our emotions. It was my own experiment to find the right mixture of words that gave readers the explosion they looked for in a magnificent book making it a true must read.

Sherry Genga is the owner and founder of Spring-eze Women Shoe Inserts. Her entrepreneurial nature evolved from her current 27-year career as a waitress in the High Roller lounge at Foxwoods Resort and Casino. She shares her experiences in classrooms with young entrepreneurs at local colleges to inspire them and offer the skills and resources to invent and develop new products. Her philosophy led her to the Connecticut Manufacturing Resource Center program, which helps small and midsize businesses in areas such as supplier development and securing a manufacturer for their product. Sherry is married to Jason Genga, and she has two children, Justin and Nicole. She resides in her small town in Connecticut where she grew up.