For much of my life, I have concerned myself with the question, “What does it mean to be creative?” When young, I thought being creative meant having raw talent, a view that automatically disqualified me from the ranks. I would peer at the ever-much more elegantly crafted artwork of my elementary school classmates in despair. In fact, this view caused me to set art aside art-making for many decades.

In my 30’s, I returned to drawing by finding a clever way to work around the talent issue. I began drawing in service of communication. In other words, I started to illustrate the concepts I was developing in the books I was writing. This device became especially important in my first psychotherapy book, Psyche’s Veil, which applies nonlinear science to clinical practice. Because I was working with such novel concepts, I had to make my own illustrations to facilitate visualizing them. Here is an example from that book that illustrates two forms of self-reference, continuous (Escher on the left) and discrete (Hockney on the right). 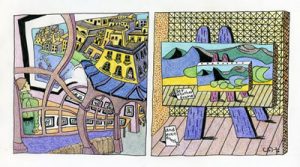 During my current stage of life, I have a different view of creativity than talent. I have also gone from focusing on product to focusing on embodied process. I recognize a crucial way that mindfulness and creativity dovetail, as initially inspired by the work of Ellen Langer at Harvard. Langer is both a psychologist as well as an artist, plus an early proponent of mindfulness. Unlike John Kabat-Zinn, another early Buddhist-informed practitioner who views mindfulness as the capacity for present-centered awareness, Langer views mindfulness as the capacity to perceive novelty. From the embodied position of my yoga practice of 40+ years, I completely endorse Langer’s perspective. After tens of thousands of sun salutations, the art of the yoga involves making the next sun salutation completely new and distinct from all others.

I now believe in two contrasting ways to approach the essence of creativity. The first implicates traditional productions like painting and sculpture and other works of art, which is all about creative expression, whether as meaningful, novel, or useful product or as enjoyable, productive, or otherwise meaningful process. A second, contrasting way to understand the essence of creativity revolves around creative perception. This approach fits Langer’s notion of mindfulness as the perception of novelty. It also fits the kind of creativity involved in being a spectator who fully experiences and deeply appreciates a piece of someone else’s art. For example, in literature, to deeply enter into a great piece of fiction is in essence to co-create and re-create the book. In this more receptive sense, creativity emerges in the eyes of the perceiver. 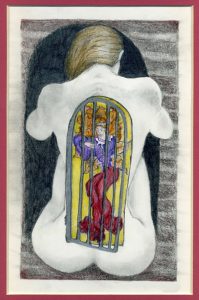 From an expanded sense of creativity, I suggest that all psychotherapists, whether engaged in somatic work or in traditional talk therapy, are simultaneously artists, and that all effective psychotherapy is co-creative by its very nature. The art of psychotherapy is in the precise timing and subtle choices of what gets said or how touch is delivered. From the perceptual side, psychotherapists pick up on tiny cues that allow synchronous rhythms of body, mind, heart and soul. Likewise, it is a creative act to encourage, inspire, and welcome in emergent products from the relational unconscious, such as images, symbols, metaphors, or dreams that guide, light, or unblock the path forward. For example, the Wild Woman drawing above (first appearing in Psyche’s Veil) came from the spontaneous imagery of a patient who felt her aliveness trapped within her body.
To read Terry’s  article, please CLICK HERE 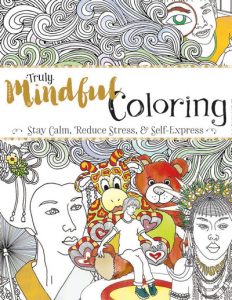 Terry Marks-Tarlow is a licensed clinical psychologist in private practice in Santa Monica, CA since 1985. She specializes in deep transformation as well as creativity and its blocks. Besides being a psychotherapist and drawing, she has practiced and taught yoga over the past 40 years, and she has been studying ballet and jazz for nearly as long. Before becoming a psychologist, she toyed with the idea of becoming an artist. She’s never given up this dream. She draws on a regular basis and has written and illustrated four other books. She writes about nonlinear science and the importance of clinical intuition to effective therapy.

To buy Terry’s book, simply CLICK on the Amazon link.