It’s summer time and the living doesn’t feel easy. The nation approached the climax of the most uncreative election campaign I can remember, with Teresa May refusing to participate in election debates and Jeremy Corbyn participating as fully as he could in spite of the best efforts of many media channels to scupper his campaigning. There have been three ‘terror attacks’ in the UK in the past few months, the most recent on Saturday night, June 3, 2017, on London Bridge. Countless other attacks across the globe go largely unreported; no 24 hours news coverage and live BBC interviews for the families of the 68 children who died in a Syrian bomb attack in Idlib province in April.

Responses to the recent attacks are interesting. Actually, that’s rubbish. They’re far from interesting; they are depressing and depressingly predictable. Brushing my teeth this morning, I found myself feeling profoundly ashamed for being British – foolish of me to have watched that Boris Johnson on YouTube, with the sinking feeling that he might have been Prime Minister if the Tories had been overtly victorious in their recent election. Instead, we find ourselves with a hung Parliament, May claiming she’s going to create a new government, and Corbyn’s Labour party earning more seats than May expected. 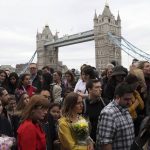 In response to the London Bridge carnage Teresa May has announced “enough is enough”, proposing crackdowns on the internet, New York Times reporters are being criticised for saying the UK is ‘reeling’ after the terror attacks in both Manchester and London, with the resulting proliferation of #notreeling social media commentary. According to the Guardian the attacks simply bring out our defiant British humour. Ho bloody ho, I must have missed out on that stoical British humour gene, for I am sick of this dissociated war-mongering militaristic arrogance at the heart of our nation, carefully concealed beneath a veneer of suited, business as normal calm and respectability. It is out of date, misplaced, sickening and dishonest.

I’m struggling to find a response in the midst of defiance, condemnation, ‘keep calm and carry on’ narratives and the lack of stopping to reflect awhile, all underscored by a very British and very familiar sense of fear and waiting. I feel some urgency in finding a response because I know clients will be arriving in my therapy room in a day or two with their own responses, their fine antennae accurately tuning into my own levels of jangled-ness. I breathe and notice the turmoil in my belly and the dull ache in my heart, which, as I track it, moves diagonally across my chest before slowly encroaching upon my tightening throat, pinging my tear ducts, making me swallow hard and determinedly – keep calm and carry on – old habits dying hard.

The greatest tragedy is that all the while we are busy fighting the ‘war on terror’ and busy extracting ourselves from Europe, we are failing to attend to our relationship with the earth, failing to listen to the earth and her beings and the more pressing business: climate chaos, keeping fossil fuels in the ground, engaging with the realities of the 6th extinction crisis, to name but a few. You’d think we might be interested in this, even from the point of view of enlightened self-interest, given our interconnectedness, even if we fail to recognise the inherent value of life in all its myriad forms. No, seemingly not, although the resistance response to Trump pulling out of the Paris deal has been strangely heartening.

I count myself as fortunate that I dwell with friends, family, communities who grapple with the dirty secrets and I’m reminded of the words of ecologist, activist and writer Stephanie Mills:
“Among do-gooders, it is bad form to be a pessimist, but I cannot seem to get that extinction crisis out of my mind. Or that population explosion. Or global climate change. Or the consequences of an era of trade agreements. Can’t get those billionaires; those landless, homeless, jobless billions; those new diseases; that global casino of finance capitalism; the corporate capture of the media; those aging nuclear reactors; those surveillance satellites; those crowded prisons out of my mind” (Mills, 2002: 28).

I realise for the first time that I feel hugely privileged to be in touch with those who are engaging to do whatever they can to raise awareness, resist, educate, process, act for some recognition and lessening of the ecocide which is taking place. Don’t get me wrong, I think most people are aware of the destruction, but have no idea of what to do or how to engage, feeling in turn overwhelmed, powerless, in denial, disenfranchised, sometimes go off on a hedonistic trip when nothing else works – the trip doesn’t work either, but the hangover only lasts half a day. I feel all these things, too, I’m just blessed to be in good company witnessing them. It doesn’t make it better, but at least I can still act. My throat loosens a bit, my energy descends into my solar plexus and I feel my feet on the earth and enjoy for a moment the rain lashing furiously against the window pane.