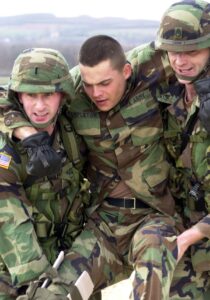 One of the primary resources we tend to lose track of under traumatic stress is our ability to support our vertical orientation. A poignant illustration of this was a video I watched that depicted three soldiers leaving a combat scene. The soldier in the middle, supported by his upright comrades on either side, is crumpled into a slumped posture. The narrator comments that the soldier in the middle is noticeably traumatized and unable to walk upright (Van der Kolk, 2014). In other words, he is no longer able on his own to orient to the world from a state of verticality.

We know as Somatic Experiencing (SE™) practitioners that when confronted with threat our bodies assume certain postures in response. When we go sympathetic we tend to brace our limbs, crouch and shorten our stance as we prepare to run or fight. When we go parasympathetic we take on a posture of going down toward collapse or fetal so as to protect our vital areas and to make ourselves small. In both cases, we have relinquished the full vertical orientation of our spines and nervous systems. This is appropriate when meeting the threatening circumstance. It does not serve us when fixed and habituated postures create an orientation to the world that does not allow us to be free and balanced. 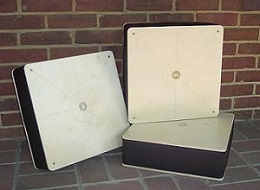 The Tuning Board is a somatic tool that addresses this problem of a non-resilient ability to return to a fluid vertical nervous system. It is increasingly known and used for this purpose in the SE community as well as among other somatic therapy practitioners. A unique balance board device, the Tuning Board gives the individual the task of relating to a comforting constant motion while the spine is in a state of vertical orientation. This movement-related task directly confronts the immobilization or fixation patterns that tend to be so characteristic of trauma, as a connected flow of movement transmits through the body from the feet and ankles upward.

Beginning with this basic dichotomy of movement confronting immobility, there are multiple ways in which the Tuning Board can support the goals of SE work. The Tuning Board introduces movement as a resource in the form of a very intimate and caressing type of movement felt at the deepest levels of the central and autonomic nervous systems. This flow of movement affects both the non-conscious reflex system and voluntary motor systems. As the movement and the fixation come into direct communication, an awareness task arises: how are these fixations presenting themselves in our embodiment? What is being revealed in regards to the sensation, image, behavior, affect, and meaning (SE’s SIBAM) modes of expression?

Darrell is offering a FREE 75 minute webinar online, Thursday, June 25, 2020 on using the tuning board in Somatic Experiencing. CLICK HERE for information